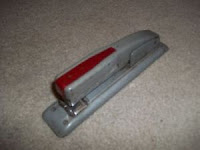 Can you believe before the Stapler was invented, folks were sewing papers together? Not a day goes by that I don’t use mine for something.  I well remember the day I received my first lightweight Swingline. I was so used to the heavy old model that, upon first use, I actually whacked myself in the head with the lighter one ;-) We should have been suspicious when our daughter didn’t complain about the “No more nails in the wall” rule. What did she use instead? Yep, staples. 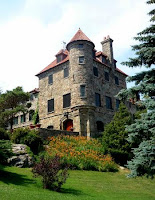 Bookcases that slide or swing out, a trapdoor under an old kitchen table, I’ve been fascinated by Secret Passages since I first learned they existed. In fact, the President of Singer Sewing Machines built a castle on Dark Island, featuring an extensive network of them. And of course, there’s the Winchester House, which we know has at least one ;-)

On the subject of passages, the one across the desert sands of Imperial Valley to the saline clutches of the Salton Sea is one that may always remain a mystery. 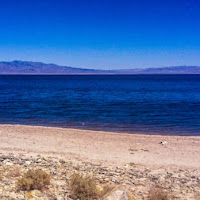 It’s been called “otherworldly” in reference to the unbelievable location of a 350 sq. mile area lake in the middle of an unbearably hot, barren desert between California and Mexico.   The reason for its presence there begs more questions than available answers. For example, we know it was most likely formed (centuries ago) due to shifting of the Andreas Fault beneath it, thereby placing it at the lowest point of what is called a “tectonic pull-apart basin.”  Water lines on nearby buttes show that flooding from the Colorado River filled this basin numerous times before a dam was built in 1907.

We also know that the Salton Sea is an endorheic – or closed – basin, meaning that other than seeping into the ground, or by evaporation, there is no natural drainage – or way out – for the water, as well as for, perhaps, a hapless Spanish Captain and his treasure-laden Galleon. (You may recall I mentioned Captain Itube on ‘Letter I Day’) The question is:  how did the Captain wind up stuck in the Salton Sea in the first place? This is where unsubstantiated timelines produce undefined answers as questions pop up like tadpoles in a mysterious, murky saline sea. Could there have been a mighty storm that forged a ship-sized passage? Possibly. Could that passage have dissipated in a matter of hours or days?  Not likely.  Wouldn’t the Galleon have been discovered when the basin was dry as a bone in 1860? It wasn’t.   Yet speculation still abounds.  If you’re interested, here’s an absorbing account of what was, and what became of the Salton Sea.

Stay tuned on Monday, for a fable that reportedly flew out of this unfathomable lake in the desert!

Hug a Sibling and have a Happy Weekend!

Any thoughts? Can you add to the list of things we appreciate that begin with the letter S?