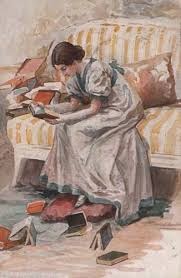 "I am returning this otherwise good typing paper to you because someone has printed gibberish all over it and put your name at the top.”  ~ English Professor at Ohio University, name unknown

Pretty harsh, huh?  Don’t you just cringe every time you see a crazy new word invented by those who would rather make something up than use perfectly good language already in existence? To be fair, the word “Twitter” has been around for ages; it’s just that birds aren’t the only ones who do it anymore. As for “Twerking”, I’m sure there’s good reason a word for that had heretofore never been thought of…

In fact there’s more than a few interesting old words we could be having fun with. For instance, who owns a pair of Winklepickers?  Do you Bibble or Xertz your food or drink? Have you ever had Agastopia?

Glossary:
Agastopia – Admiration of a particular part of someone’s body
Bibble – To drink often or eat/drink noisily
Winklepickers – Popular in the 50’s; a sharply pointed shoe or boot
Xertz – To gulp down quickly, greedily

But honestly, if you want your words to flow, writing is serious business.  And more important than being read is being easily read; when the whispers of your heart sprinkle the page with vivid images of the world you want the reader to find irresistible.

Easier said than done sometimes, right? One surefire solution to barriers in a river of words is music – not just a soothing melody, but the lyrics (Okay, not all lyrics). Words set to music have a flow all their own.

“But the Oaks can’t help their feelings, if they like the way they’re made. And they wonder why the Maples can’t be happy in their shade.”  ~ Rush – The Trees

To be fair I must also offer two words of caution when writing lyrically: Purple Prose

As a reader I can be helplessly charmed by the pulse of flowing prose –until or unless I feel ensnared. After all, even the loveliest perfume can be overwhelming if too liberally applied. As a writer my prose is my language and I sure don’t want to be misunderstood.

How about you? Have song lyrics ever inspired a feverish bout of creativity? What do you do to liven up—or tone down—your prose? Imagine your best work being made into a movie, what would your soundtrack be?

“It seems to me that those songs that have been any good, I have nothing much to do with the writing of them. The words have just crawled down my sleeve and came out on the page.” ~ Joan Baez

Until again folks, don't leave your cake out in the rain...

As every writer knows, the most commonly asked question is “Where do you get your inspiration?”

You mean, besides soft music, scented candles, a book I can’t put down or the laughter of a child? For a writer there’s much to be read in the haggard face of a homeless person, the furtive glances of an unkempt youth in the cold medicine aisle of the Pharmacy, and who can overlook the light of discovery in the eyes of child who just tied his own shoe?

If ever I do find myself at a loss for inspiration I have only to step outside and here are some reasons why:

One Summer Morning
All lanes were evidently open at Heaven’s bowling alley this morning as I was awakened by a riotous strike that sent celestial pins rolling boisterously across the sky. But what had me scrambling hastily from my bed was the rain. Not just a shower but a colossal branch-bending downpour! Monsoon had begun and I wasn’t about to miss it. Wasting only a second getting my Uggs on the right feet I sped down the steps, flipped on the coffee pot and continued my trek outside where the rain cascaded in shimmering silver sheets against a backdrop of twinkling city lights. I felt so awake - so alive, I could almost hear the desert sigh. But a cup of coffee wouldn’t hurt. Taking that first delicious sip, I glanced at the microwave clock which read: 3:45AM.
Good Morning, Arizona!

As one of the four corner states where you can stand in one place and see highways stretching in all directions, each one beckoning adventurous travelers “This way” on faded billboards, we know it’s a tough decision.

But should you happen to choose Arizona as your next exciting venture, whether from the four corners or via our historic Route 66, you’ll be in for a grand buffet of breathtaking landscapes, diverse cultures, natural wonders and wide-ranging climates which accommodate a vast array of wildlife uniquely suited to each.

The Saguaro cactus is our state cactus and takes fifty to one hundred years to grow an arm! You can judge a Saguaro’s age by its height and cutting one down could earn you 25 years is prison.

Roughly the size of Italy, Arizona boasts more parks and National Monuments than any other state. In addition to eleven million acres of National Forest, we also have the largest percentage of land designated as Native American territory and are proud to host the world’s largest telescope – Kitt Peak National Observatory.

In winter you can ski in the morning up north and barbeque a burger for supper down south, so you’ll want to pack shorts and ski boots for even a brief vacation.

Out “where the west was won” there’s actually a town dubbed “Too tough to die”, which seems to apply to some of our laws and ordinances. For example, though no longer used for transporting goods and all but unheard of out here, hunting camels is prohibited.

It is also illegal for donkeys to sleep in bathtubs or for anyone over 18 to have more than one missing tooth visible when smiling. J You cannot ride your horse up the courthouse steps or smoke within fifteen feet of an establishment without a liquor license. In Tucson, women may not wear pants. (Someone forgot to tell the Cowgirls!)

Contrary to popular belief, the famous gunfight at OK Corral lasted only about thirty seconds, but the daily re-enactments in Tombstone last year contributed to sales tax revenue of about $678K for the town of more or less than 500. And lastly, it is illegal to refuse a person a glass of water – statewide.
Happy Trails…..

So, what’s outside your door? Does anyone have only one single source of inspiration? What inspired your most favorite piece of work? 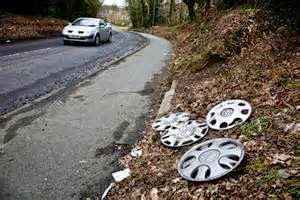 I lost a hubcap off of my T-bird one afternoon during rush-hour, right in the middle of the intersection. I heard it clang on the pavement, from the side mirror I watched it roll away. Should I have stopped right there in the intersection; halting traffic as I chased it? Did it really matter? Well, shoot yeah, it mattered. For the two weeks it took to find a new hubcap it felt as if I were walking around with a run in my stocking!

My thoughts (naturally) turned to writing and how rejections aren’t the only thing that can plague a writer. Regrets ought to be at least a close second. You know, that one nagging paragraph that, now that you see it in print, should really have been worded differently (Gads!), or the blog that garnered one measly ‘like’.  What’s a writer to do? Keep writing, of course! Regrets are naught but revelations of yesterday’s unknown. Today, you know better.

On the off-chance that I’m not the only writer to ever encounter the dreaded regrets I did a little research and discovered some truly interesting stuff. Anyone remember “Brokeback Mountain”?


Mark Twain
Tom Sawyer
“I perhaps made a mistake in not writing it in the first person,” Twain confided after the book’s completion in a letter to Atlantic Monthly editor William Dean Howells. Another anxiety (misplaced, it turns out) ran deeper than the narrative mode: “It is not a boy’s book, at all. It will only be read by adults.”
William Powell
The Anarchist Cookbook
As an adult convert to Christianity, Powell regrets his youthful work. “The book … was a misguided product of my adolescent anger at the prospect of being drafted and sent to Vietnam to fight in a war that I did not believe in,” he wrote in 2000.
Arthur Conan Doyle
“The Final Problem”
After killing off Sherlock Holmes, Conan Doyle declared defiantly, “If I had not killed him, he would certainly have killed me.” But he lived to regret it—or caved to the pressure—and brought him back to life ten years later.
Courtesy:         http://nymag.com/news/intelligencer/author-regrets-2014-2/

There now, I feel better all over more than anyplace else, don’t you? Specifics aside, have you experienced regrets?  As shown above, true writers keep writing. Why do you suppose that is?