On a sultry afternoon, the panoramic vistas are but breathtaking overtures to the reticent visages of unquiet souls that wander forlorn where graves lie thick, by the light of a shadowy moon.

About a mile east of the San Pedro River, eight miles southwest of Tombstone (eleven years later), and mere yards from Charleston Highway, a German mining engineer named Frederick Brunckow, established the San Pedro Silver mine and built himself a nearby home atop a rock-strewn knoll, that would become known as the “Bloodiest cabin in Arizona history”.

Frederick Brunckow was one of the first of at least twenty-one, who met an untimely demise in over two decades of uninterrupted violence; attributed alternately to Apache raids, Mexican workers, and unbridled greed.

Brunckow’s cabin lolls in ruins today, and though many a marker has been placed in remembrance of the identifiable few, only a solitary cross remains.

While several attempts have been made to document reports of ghostly sightings in and around the ruins, none have as yet been successful.  One account is of a paranormal team photographer; having seen two men dressed in full mining gear, approaching the ruins in the moonlight. She placed her glasses on a ledge to check her equipment, only to find both lenses removed from the frame when she reached for them again.  Her teammate returned, complaining that the batteries in his brand new flashlight had suddenly failed.  The two men were not seen again that night, but both team members attest to hearing the sounds of an active mining operation going on in the long abandoned shaft.

The San Pedro River Valley; literally peppered with old mining towns and campsites, remains a favorite among areas I enjoy exploring and digging for old bottles and such.  However, unmarked graves would not be on my list of cool discoveries. How about you?

Of all the stories I’ve heard and read about Brunckow’s cabin, it seems the phantoms are quite unconcerned, if not unaware, of the living. Which leads me to believe they’d rather be left alone; in contrast to most ‘hauntings’.  Do you believe it’s possible?

Each year I try one new Halloween craft. Last year my attempt at ‘spooky eyes in the bushes’ failed miserably when none of the glow sticks worked right! (Dang dollar store, anyway!) And, on the off-chance I get more than one trick-or-treater this year, I’ve tried something else…

Happy Halloween!
Notice how excited my girls are? 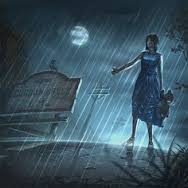 Fear not the stars on moonless nights, for they are at their brightest. While demons sleep without the light, the wakeful dream of guidance.  Beware the glowing autumn moon as you would tend your seeds, and heed the piercing call of loons; crouching in the reeds.

They walk among us. And sometimes, they hitchhike.
It could just be a starless night without a glowing moon when one might encounter on a lonely desert backroad in the deepest hour of the night, a restless spirit seeking transport; not to, but away from a dimension from which it can’t escape.

As advised by any native elder, most folks would keep on driving.

For every crisscrossed backroad or unmapped battered byway, folklores hang as faded signs of tortured spirit pathways. And still, sometimes we stop.

Frequently told is the tale of a young maiden who canters in festive attire; her blue-black hair dancing in the midnight wind that swirls her ankle-length skirt. Her lively steps belie the futility in a random direction on an unchartered course of a life unknown and forever unlived.

Ever smiling, a young boy stands at a barely discernable fork in the road; the left side long since traversed. In summer shorts and bloodied tee, he waves a rusted bicycle horn.  While he always declines a ride, he will give his name as that of someone you know.

Antiquated neon signs line a darkened stretch of highway where a scraggly long-haired dog darts in front of passing cars that hit the guardrails in sudden panic.  Then, when drivers dive off the nearest ramp to calm their wobbling knees, the silhouette of a Calvary man on horseback watches from the mountain pass at Picacho Peak above.

Resplendent in a flowing Holy robe, the Lost Father, patiently waits for a ride to take him four miles southeast, where he then hails a ride back to where he was first picked up. It is said that should a roadrunner cross your path, the Father will have found his bones.

I suppose that with stories like these floating around my gullible youth, I needn’t have wondered about the meaning of hitchhikers in the night being “Dead giveaways.”

Though helping a stranded motorist in daylight used to be acceptable and relatively safe, it would seem that few movies depict the activity as advisable these days. Does anyone remember “Scarecrow” with Al Pacino, or “Honeysuckle Rose” with Willie Nelson? Remember the hitchhiker the girls in  “Thelma and Louise” picked up?