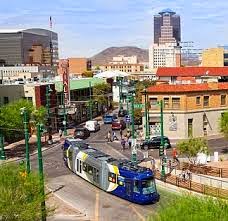 As I write, it’s a glorious Sunday morning out here in the desert; a slight breeze rustles the pages of my as yet untouched newspaper and the coffee seems especially good, as I reflect on the events of the past week and contemplate the possible variables of the week ahead.

We’d planned it for months and finally got around to doing it; an inquisitive writer’s adventure, one might say. Though it was curiosity that compelled us, it was our determination that nearly got us Three Amigas in trouble when we took our first, much anticipated Streetcar ride through the Old Pueblo last week.

Honestly, who could resist investigating the roughly two hundred million dollar, 3.9 mile trolley system; the subject of endless debate? Not us.

Well aware of recent revelations of the streetcar having fifty percent more riders than payers, we were diligently huddled around the ticket box trying to figure out how to purchase our passes when the streetcar swooped to a stop beside us and the doors swished invitingly open. We hopped right on in a hurry and the trolley began to move before we were seated.

Knowing we’d spontaneously committed a streetcar crime, we exchanged nervous glances. Would we Three Amigas make the headlines in the coming days? Gulp. It wasn’t long before we knew our fate.
Long about the Mercado District; one of the oldest inhabited regions in North America, the streetcar slid to a stop, the glass doors of the driver’s cab slid open with a sinister hiss and a colossal man emerged with a booming voice that could probably be heard two districts over. He asked if everyone aboard had passes. It was easy to assume he was talking to us as we were the only remaining riders, but Ah, funny you should ask, immense one…  I feared we were toast.

But “Kyle” turned out to be quite congenial and informative after he’d guided us through the task of purchasing passes, and the remainder of the trip was rather enjoyable.

I’m fairly certain it was the exhilaration of the streetcar adventure and a wonderful ‘Girls Day Out’ that has prompted me to do something else out of the norm;
I’ve signed on to the Blogging from A to Z April 2015 Challenge! Hope to see you all there!

Email ThisBlogThis!Share to TwitterShare to FacebookShare to Pinterest
Labels: adventures, Arizona, Streetcar. A to Z Challenge

Whisper of a Falling Tree

"In the woods we return to reason and faith." ~ Ralph Waldo Emerson

When the first crack echoed through the forest, only the birds and squirrels took notice and scattered as branches began to snap. "Don't despair the sunlight, behold the forest large,” he whispered. And a few short years went by…

It was one of those beautiful summer days when the stream sparkles with the freshness of spring and every green is new as I sought my favorite shelter; my sturdy, shady tree with a front-seat view of a vibrant yellow meadow hosting a butterfly convention, that I realized the tree had fallen. And the shimmering aspens whispered “He told you…”

While we can’t always wish away the changes in life or nature, we can direct the impact to a tolerable degree through acceptance and belief in the natural order of love and life and nature. A baby’s first cry in a loved one’s last sigh… I stood in the sunlight and blinked away tears until I gaped in astonished wonder at four knee-high saplings where my fallen tree had stood! And a few short years went by…

On a recent visit to our summer retreat my grandson pitched his little tent between the four impressively tall former saplings as I sat with my books beneath my newest favorite tree. Having found the old pine with initials carved by a high school flame, my daughter reported the initials were carved much higher than she remembered (Ha!) as I fondly gazed at the meadow where, after a nature walk with her father, my (then) seven year-old proclaimed that her daddy knew more about (animal) poop than anyone in the whole world! Kids and nature; one of the most rewarding combinations.

In fact, nature played a really big part in the creation of “Beanie’s Backyard” as it was a lizard, a very sneaky lizard who peeked through the window and caught the gaze of a toddler engaged in employing all tactics; writhing, screaming, rolling etc., to avoid having his diaper changed and--the magical gaze held! Long enough for the diaper change, and long enough to foster an insatiable interest in lizards and the outdoors as well.

Are you thinking about an upcoming vacation? Do you have an inspiring vacation story to share? Do you enjoy the outdoors, or room service? Hiking or repelling? I’d love to hear your thoughts!
Posted by diedre Knight at 8:22:00 AM 2 comments:

So here we are, on the cusp of Springtime; one of the most exciting times of the year when we feel refreshed, engaged and ready to sprinkle the literary world with the magic of our newest best-seller and we (okay, me. I noticed,) notice the oddest trend.

Certainly nobody minds reprints. That’s a term that strikes joy into every writer’s heart; your books have flown right off the shelves and demand necessitates the reprinting of more! A writer’s dream!  However, when the operative word is Remake it’s a bit of heart-stopper. Wait a minute, what’s wrong with the way it was?

Suddenly the glorious warmth of having your book made into a movie is an ice cube stuck in your throat.  Do you quickly sip a cup of hot coffee while frantically searching your documents and memory banks for exactly which rights you retained and desperately hope that this new version of your work doesn’t shoot up and fizzle like a defective Roman candle at a beach party bonfire?

Or do you consider that imitation is the sincerest form of flattery?

Sure, there are exceptions. For instance both adaptations of the movie “Tombstone”; based on historical facts and fiction, leave it wide open in terms of perception.  (I was crazy about Val Kilmer as Doc Holladay, though not everyone cares for the character in general)  But between the two vastly different versions of “Willy Wonka and The Chocolate Factory” which do you suppose better depicts the writer’s intent?  And how in the world can they improve on “Jungle Book”?

Do other examples come to mind?  And in the long run, as long as you (or your heirs) are still making money, does it matter?

Love to hear your thoughts…