High above the verdant Verde Valley, Mingus Mountain stands as silent witness to likely thousands of years of spellbinding specters and shady shenanigans in and around the area below. Not the least of which is the historic town of Jerome.

Once known as the “Wickedest Town in the West” this small, northern Arizona mining community seemed to blow up, fill up and dry up with the speed of summer puddle in Tucson. However, not everybody was willing to leave when the mines shut down.

Just walking the streets of the extremely well-preserved ghost city, it’s easy to see, or rather feel why some have stayed and some have simply gravitated here. There’s a certain mystic energy in the area in general, which would explain the many writers and artists who have taken up residence. As far as for many of the other residents, well, you’ll see.

Nearly every mining town that ever boomed had its share (and then some) of lawlessness and Jerome was no different with its saloons and rowdy miners, shady businesses and bordellos. And as you might imagine, some of the most, (ahem) colorful characters were found in the bordellos. One such place is now known as the Mile High Inn.

Back in the 1920’s, the Victorian-style, eight room inn was owned by Madam Jennie Banters; touted as the richest woman in northern Arizona, who ran her business with a keen eye on customer satisfaction and enjoyed cooking beside the help in her own restaurant. But even the savviest business person is helpless to prevent the occasional altercation between personnel and patrons and when the altercations increased in frequency she was forced to relocate her business a few streets away to what was called “Husband’s Row”.

Nowadays, ghostly hangers-on roam the halls in flowing white gowns and dapper suits while furniture is rearranged amid the banging of armoire doors and utensils fly in the kitchen as small appliances turn on by themselves (Somebody, hide the electric knives!). Meanwhile a friendly cat may rub against your leg, but when you reach to touch her, Madam Jennie’s beloved feline disappears without a trace except for paw prints on the freshly made beds upstairs.

Of obvious note is how precariously these buildings of yore seem to cling to the side of the mountain. In fact only a handful have ever waivered, most notably the Jailhouse, which now rests intact but considerably further down and across the street from its original site.

But the most stunning engineering feat is the old five-story United Verde Hospital; made of concrete to withstand the powerful blasts generated at the mine and poured at a fifty degree angle at the top of Cleopatra Hill. It sits stoically about fifteen miles above the town of Jerome and after forty-four years of vacancy is now (I’m baffled by the wisdom of this…) known as The Grande Hotel! Perfectly restored and maintained in its original 1926 Spanish Mission-style splendor, the hotel is a high class, full-service enterprise, complete (or should I say rife?) with paranormal entities of hospital personnel in full dress who check on patients who aren’t in beds; which aren’t there either, and ailing patients who cough and moan and sneak into non-smoking rooms to light up.

Not surprisingly, staff at the main desk report frequent phone calls from vacant rooms and having to retrieve the statement of rules from the lobby floor to hang it back in its place on the wall behind the desk.

And of course there’s poor Claude “Scotty” Harvey, the maintenance guy who was killed when he was crushed by the elevator in the basement. Popular consensus is that Scotty was murdered, since the 1926 Otis Self-service Elevator was (and still is – gulp!) in perfect condition. Needless to say, Scotty is not happy and haunts around with a scowl on his face.

Naturally mineshafts aren’t immune to apparitions, given the amount of ordinary tragedies which can and do occur. One particularly gruesome incident was when a miner named Charlie was decapitated in a tragic accident down below. While his head was indeed recovered, his body never was and it is widely believed to be the specter of Charlie who wanders the abandoned shaft, looking for his head.

I absolutely loved this town, though I didn't know half of all this back then! The energy I spoke of is truly tangible and more than amazing. Happy Trails, everyone!

Convention at The Monte V


Strategically established along Route 66 (I-40) between the majestic Grand Canyon and the multihued badlands of the Painted Desert, Flagstaff Arizona continually attracts the interest and respite of both tourists and businesses, present and past while offering more than a few noteworthy attractions of its own.

For instance the Lowell Observatory (Anyone remember Pluto?) for the best star-gazing seat in the world’s first international dark-sky city, or camping in North America’s largest ponderosa pine forest. Graciously provided are some of the coziest B&Bs and finest hotels, as well as state-of-the-art facilities for trade shows and conventions such as the (on-going) one at the Hotel Monte Vista. You might even say there’s a relatively modern-day ghost convention in progress.

Opening New Years’ Day of 1927, it was instantly popular and locals coined the phrase “Meet me at the Monte V”. The very first year in operation the hotel hosted a daily three-hour radio program by Mary Costigan in room 105, and in addition to the usual assortment of ordinary gunslingers, gamblers and drunken brawls, went on to host such celebrities as John Wayne, Bing Cosby and Harry Truman.

Incidentally, John Wayne was one of the first guests (1950) to report a benevolent ‘presence’ in his room. Back then staff members wouldn’t have suspected the ghost of the hapless young gunman who’d been shot while robbing a nearby bank (1970’s) and stopped by the Monte V for a celebratory sip before succumbing to his injury there on the floor of the Lounge. Now many years later, staff members generally believe it is the gunman’s voice that greets “Hello” when the bar opens each day.

Since no one has ever been on the line, it’s difficult to say who might ring the Lobby phone at odd hours of the day. But staff will readily tell you that guests of the Zane Grey room have been awakened in the night to the sound of knocking at the door and someone announcing “Room Service” only to find the hallway empty.  In fact the staff is reluctant to allow pets in this room because dogs tend to go nuts with fear and tear the place to shreds.

Band music can often be heard in the second floor lobby, without benefit of a band and a long-term boarder in room 220 (1980’s) seems to have extended his stay and refuses to leave clean sheets on the bed, though he no longer hangs raw meat from his chandelier.  (Gads!)

Of course there are the usual suspects, such as the woman in a rocker near a third floor window who will drag the rocker back to the window if it is moved away and the two painted ladies (not to be confused with butterflies—ha!) who are fond of giving guests of the Gary Cooper room the heebie-jeebies.

The Hotel Monte Vista is on the National Registry of Historic Places and is the longest publicly held commercial hotel in the history of America.

Until now I hadn’t considered the idea of ghosts from my own lifetime—Hey, don’t I know you?—seems like it might be scarier than never having known the time or place—or ghost. What do you think?
Posted by diedre Knight at 2:10:00 PM 14 comments:

Pearl of the Desert


Be it by chance or divine design some folks are simply destined to become ghosts. Consider the story of Miss Pearl Taylor. An attractive, petite Canadian girl from a middle-class family, Pearl was fascinated with stories of Annie Oakley.  This may have emboldened her efforts later when she became notorious as Arizona’s first and only female stagecoach robber.

At seventeen she fell in love with a shifty gambler named Frederick Hart. And when Frederick lost his job as a carnival barker, Pearl gave up an enjoyable singing career to move on with him. Their travels eventually led them to Arizona. Two kids and two failed attempts at saving the marriage ended when Fredrick knocked Pearl unconscious during an argument.

Having deposited her children safely with her mother back home in Canada, Pearl headed back to Arizona where she struggled to make ends meet. Depression led to several attempts to take her own life though each time she was saved by acquaintances; one of whom was a miner by the name of Joe Boot.

Since Joe had been planning to rob a train anyway, he had several daring ideas when Pearl turned to him with the news that her mother was gravely ill and needed money. One such idea was for Pearl to lure men to her room under the premise of romance while Joe hid in the closet waiting to attack and rob the unsuspecting ‘customer’.  When this didn’t prove as profitable as they’d hoped, Joe had another idea. 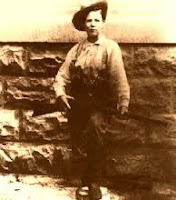 They would rob the stagecoach that ran between Florence and Globe. After careful planning Pearl chopped her hair and donned Joe’s clothes for a heist that went surprisingly well (no one was killed) until afterward, when the two found themselves lost in an unfamiliar area of hostile desert.

A few days later, famished, parched and weary from the arduous ride, the sheriff and his posse found the two napping in the shade of an aged mesquite. Temporarily held in a small jail in Globe, Pearl seemed to enjoy her new found notoriety and readily signed autographs for clamoring visitors; seeking a glimpse of the ‘Lady Bandit’. Her subsequent and short-lived escape further enhanced her growing legend. 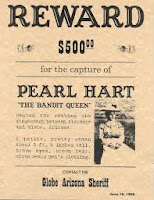 After lengthy separate trials, Joe and Pearl were both sentenced to Yuma Territorial Prison; the most brutal of any prison environment at the time.

Located near the dry wind-whipped sands of Imperial Valley, temperatures held steady at upwards of 110—morning through night from spring well into fall, and the facility was far from equipped to accommodate those conditions.

Wayward Joe, who managed to escape less than two years into a thirty year sentence, is believed to have fled to Mexico and has never resurfaced, while Pearl beguiled her captors into early parole after only eighteen months and eventually settled down with a rancher in Dripping Springs.

The Yuma Territorial Prison has long since closed and now serves as a museum within an Arizona State Park. It has been the setting for many TV shows and western movies and remains the subject of much fodder because—you guessed it!—it’s haunted.

Purported sightings or auras include the fleeting visage of a prisoner pacing his cell, a distinct presence in the “dark room”, that likes to pinch people, is attracted to the color red and once terrified a reporter from a high profile magazine who requested time alone in there to research. In addition there are reports of morning female serenades…

Since Pearl loved to sing almost as much as she loved her notoriety, Could she have enjoyed her stay so much that she occasionally pops in for a visit? If you were going to haunt somewhere, where would it be?