Z is for Zuni Fleabane!  If there was ever a time I experienced Zen it would be while standing at Four Corners, USA. Imagine 360 degree choices, opportunities for new adventures every way you turn! Or perhaps it was just a lingering sense of spirits past; still whispering in the ruins I had just visited at Canyon de Chelly on the Navajo Nation…but that’s for a future blog- on to the letter Z!

The Navajo Nation is the largest land area (roughly 27 thousand square miles) retained by a United States tribe and much of it lies in Arizona. It is here that in the late 80’s scientists discovered the Zuni Fleabane flourishing nicely in the Chuska Mountains (it was heretofore thought to exist only in New Mexico). The Zuni Fleabane is listed as a threatened species.

Also called “Summer Snow” these pretty little daisies bloom all summer long; enhancing the somewhat rough terrain in which they grow.
“Pluck not the wayside flower;
It is the traveler's dower.”
~William Allingham
Yay! I did the Blogging A to Z 2015 Challenge 2015!  And I bet you did too! I think I heard a collective sigh of relief.  A heartfelt thank you to everyone who visited The Wild, Wild Best - I had a blast and I hope you enjoyed.  I know I enjoyed every blog I visited and only wished I could have seen more, but evidently my computer security is on steroids!
Posted by diedre Knight at 1:30:00 AM 12 comments:

Y is for Yellow-billed Cuckoo!  Contrary to their dapper appearance, these foot-long fellas are generally shy and quite practiced at the art of disguise; remaining so still as to blend into the scenery. Though you might not always see these birds, you certainly won’t miss their rather loud, rapid staccato call that sounds at first like a call to attention with a hollow wooden tube.

From the penguin-like cape that drapes the head and shoulders, to the layers of colors beneath, to the black and yellow bill, these guys are certainly dressed in their Sunday best and not surprisingly, their feathers make up nearly half their body weight!

Enjoying summers among cottonwoods along the San Pedro River, they’re here for much of the monsoon and are sometimes called “Rain Crows” for their tendency to call at the sound of thunder.  Otherwise the Cuckoos spend their days dining on chubby caterpillars and are first in line to take advantage of any sort of cicada, moth or tent caterpillar outbreak.

The male and female build their nest together, though interestingly, they put a few of their eggs in nests of other birds! Thus, the name?  In addition, these monogamous creatures are known to have an occasional extra male hanging around the nest as a type of ‘nanny’.

As summer winds down the Cuckoos head for South America for the winter as avid birders look anxiously forward to their return because the nocturnal migratory flights of the Cuckoo are imperiled by collisions with cellphone towers, tall buildings, etc., and just last year they (Western Yellow-billed Cuckoo) were officially added to the Endangered Species List.

As we get down to the wire now, one more letter left, I have to admit to being a little research weary (though I’ve enjoyed it immensely!), and find I keep having to do a double-take on the word ‘underparts’ – ha!  Anyone else?

A short rugged trek and a world away, you might believe you’ve hiked right up to heaven; where sensory perceptions are pampered and doldrums give way to astonished wonder as you traverse a realm as unaccustomed to intrusion as you are to being one.

You could run across an antelope… or a bear. You may engage in a staring match with a bobcat across a sparkling stream or have your cap snatched from your head by a mischievous coatimundi as the song of a red-faced warbler gently guides you onward through one of the most diverse plant and animal ranges in the Huachuca Mountains to perhaps behold one of Arizona’s rarest, wild, wild best invertebrates: The elusive Xami Hairstreak! 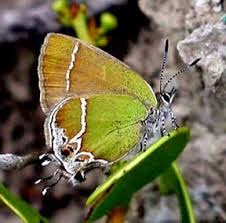 Try as I might, I came across only three recorded sightings in the last fifty or so years, so good luck, folks!


BE ADVISED! This wondrous place I like to call ‘Heaven’s Garden’ is located on one of Arizona’s largest military installations. Therefore, picture I.D’s are required, foreign nationals are not permitted without the company of United States military personnel and the entire area may close without warning due to public safety or national security concerns.

If you go be sure to pack plenty of water and dress in layers as the weather conditions can change quicker than the flick of a lizard’s tongue!

Are you a hiker? Does this sound like something you’d enjoy?