Within Arizona, I-10 from either direction will lead you through the intersection US 95 and State Route 95, which is the heart of a quirky Rock and RV mecca called Quartzsite, Arizona.  Situated 18 miles from the Colorado River and about two hours east of Phoenix (or any other place), tourism is the main economic contributor to this small desert town.  In fact, over a million visitors and vendors flock to Quartzsite each year for the annual Rock, Gem and Mineral Shows, generally held during January and February. 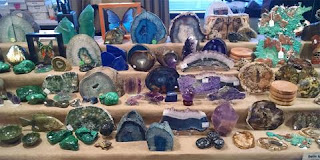 Because over half of the visitors and vendors arrive in motorhomes and other recreational vehicles and often stay long after the festivities have ended, Quartzsite is generally known as the “Boondocking Capital of the World” and while there are a handful of full-hookup camps available, many prefer the wide-open scrub brush plains where dry-camping is free, and Coyotes are occasionally seen meandering through campsites in broad daylight.
Perhaps as a favorable nod to the abandoned US Camel Corps experiment, Quartzsite runs an on-demand bus system called the Camel Express. Additionally, the town boasts two extremely well-stocked stores and a dozen or more restaurants with prices to suit even the most stringent senior budget. 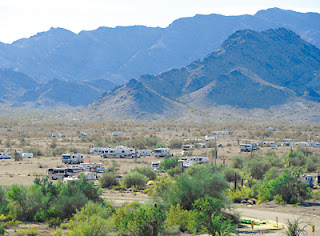 The southwestern Quarter horse is a cross between the ‘Colonial’ breed (brought west) and the indigenous wild Mustangs, including Native American horses from tribes such as Shoshoni, Comanche, and Nez Perce. This ‘cross’ produced horses that were not only lightning quick but quite comfortable around cattle; drawing the interest of ranchers and cattlemen alike. However, another man,
Rukin Jelks had a different idea of how to use these magnificent creatures, and played a significant role in Quarter Horse Racing history when he built a burnt adobe home (in the 40s) with an onsite stud-farm that would later become the very first Quarter Horse Track in the United States (Ruidoso, NM was the second).

As a kid, I thought there was nothing better than a Peanut butter & Jelly sandwich to quiet a rumbling stomach. Then, I had a Quesadilla. ;-)

Any thoughts? Can you add to the list of things we appreciate that begin with the letter Q?

Email ThisBlogThis!Share to TwitterShare to FacebookShare to Pinterest
Labels: A to Z Challenge, adventure, Arizona, Arlee Bird, Blogging, history, Inspiration, Tossing it out