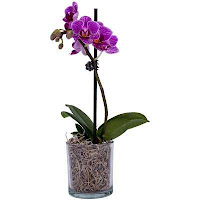 Although National Orchid Day actually fell on N Day, I’m using it today as an excuse to unabashedly brag that I have managed to bring two lovely Orchid flowers to bloom! Since a couple of well-meaning horticulture connoisseurs were less than Optimistic in my ability to accomplish this, I am Overjoyed!

Right about now there will be flowers beginning to bloom (for only one night before closing next morning, mid-day) in the Organ Pipe Cactus National Monument, which encompasses a 517-mile area of both southern Arizona and Sonora, Mexico. Named for their resemblance to pipe organs, these spiny giants can grow to 20ft high with a base as broad as 12ft. and also produce fruit which is said to be sweeter than watermelon and can be eaten as is (once spines are removed, of course) made into jelly, or fermented for beverages.

Known by many other names such as Coachwhip, Candlewood, and Jacob’s Staff, the Ocotillo has much to offer by way of uses, including living fencing and walking sticks. In addition, its crimson flowers make a tangy salad garnish - or can cauterize a wound, according to Native Americans who’ve long subscribed to the medicinal uses of its bark as well.

And onward, deep in the darkness of a pre-summer night, the desert is a lively place well until the old moon takes a bow, and Owls are but a few of the prowlers. Optimizing their natural attributes in night- vision and hearing, Owls put unsuspecting prey quite at risk as a soft second layer of wing feathers allows them to strike without sound.

In addition to pot-holders, what kitchen would be complete without an Oven Mitt? I consider it a bonus that they are made to be used with either hand ;-)

French Oak may have revolutionized the usage of the barrel for California vintners, but it’s nothing but the best, new (due to the many years spent aging) white Oak Barrels for “America’s only native spirit,” Kentucky Bourbon.

In closing, is there anything more acceptable than Omissible words when you’re already over your limit? ;-)
Happy O Day!

Any thoughts? Can you add to the list of things we appreciate that begin with the letter O?

Email ThisBlogThis!Share to TwitterShare to FacebookShare to Pinterest
Labels: A to Z Challenge, adventure, animals, Arizona, Arlee Bird, Blogging, innovations, Tossing it out