I could live on Milkshakes. In fact, I did for a while that last year of high school. Strawberry was my favorite; chocolate was good too. Shakes were just the perfect thing for hunger abatement in between classes and after-school jobs where I also enjoyed Making Money. 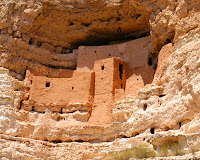 Keeping busy was one thing the Sinagua people had no trouble with, as evidenced by the 600-year old rugged high-rise suites their daring builders etched into limestone cliff faces high above the valley below.  Montezuma Castle, as it is called (though no relation to the Aztec Emperor, who hadn’t yet been born), is probably the most well- preserved cliff dwellings in North America, but access to the actual ruins was deemed too unstable in 1951. The National Park operates a Visitor’s Center within plain view of the castle, which affords excellent opportunities for photographs. 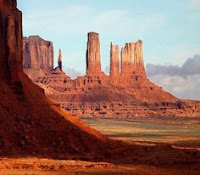 Near the Arizona-Utah border lies a high-plains version of our own star of the Silver Screen. Monument Valley in all its ruddy-red glory sports panoramic views of towering buttes and spires that have appeared in numerous media outlets, including films ranging from Stagecoach (John Wayne) to Back To The Future II; fundamentally shaping America’s earliest impression of the American southwest. Monument Valley Navajo Tribal Park is located on the Navajo nation and visitors are welcome for a nominal fee.

Isn’t there just something about the scent of Maple Syrup that makes you want a pancake? Some folks drizzle it on other things as well, like bacon, ice cream, salads and roasted vegetables. What do you put syrup on?

When I’m anxiously waiting for that first clap of thunder during summer Monsoon, reading a good Mystery helps the time pass. Cranberry Mimosas at a wedding shower have the same effect ;-)
The only things more treasurable than the experiences we have are the Memories we keep, and as my grandson brought to mind when he insisted I add Music (of course!) to the list, Motherhood has been one of the very best!

Any thoughts? Can you add to the list of things we appreciate that begin with the letter M?