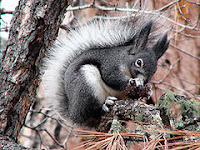 Kaibab Squirrel – Exclusive to the North Rim of the Grand Canyon National Park, and strictly protected by State and Federal government, these distinctive-looking critters (a sub-species of the Albert’s squirrel) complete a trio of uniquely substantive survival components within their natural habitat of Ponderosa Pines, and the fungi that grows beneath; which becomes part of the root system. After happily feasting on the food the trees provide, the squirrel then scampers off, dispersing the fungi collected on its feet, through the forest so that more and more trees will grow. This process is repeated year after year in a 20 X 40-mile area.

Kingsnakes – Appearances aside, the name “King” tells us that this reptile can and does eat other snakes – including rattlesnakes. This is something I very much appreciate ;-)  Kingsnakes cover the widest geographical range of any land snake and (believe it or not) are considered among the most beautiful snakes in the world for the array of polished colors they display. Some even look like the venomous Coral snake, but if you’re ever in doubt here’s a couple of saws to help you out:  “If red touches black, you’re okay, Jack” and “If red touches yellow, you’re a dead fellow.”

Kartchner Caverns is a massive living limestone cave featuring 13,000 feet of passages and two ‘rooms’ as large as football fields containing both live and ancient inhabitants such as bats, Soda Straws, Stalactites, and Moonmilk. Kept a secret for 14 years after its discovery, the caverns were carefully secured for preservation and future maintenance of the stunning and still-growing formations before being publicly presented as a Tour Cave. It is indeed an awesome tour ;-) 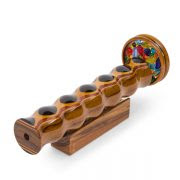 Sir David Brewster stumbled upon what became a brilliant parlor diversion in 1816 when, after observing color and pattern changes at the end of two mirrors, he invented the Kaleidoscope.

It seems that no one really knows who invented Kettle Corn, but I’m sure glad they did!

Knees are another thing I appreciate because, as my dear friend Mrs. Mildew puts it, “They’re terribly indispensable.” ;-)

Any thoughts? Can you add to the list of things we appreciate that begin with the letter K?