It was 1890 when coin-operated Music Boxes and Player Pianos were exceeded by a retro-fitted Edison Classic M Electric Phonograph called the Jukebox. This concept was improved upon several times over the years and by the 1940s Jukeboxes were an important source of income for record publishers, and accordingly, received the newest recordings first. Song-popularity counters installed within these units provided a further advantage in deciding which songs to keep or replace. These wildly popular devices delivered music on demand – without commercials – well into the 70s and could be found in frequented establishments ranging from restaurants to video arcades. Question: Have you ever seen one in a Laundromat?

Jazz Music – Known as the “King of Ragtime,” Scott Joplin, during his brief career, composed over 40 original ragtime pieces, the most popular of which; “Maple Leaf Rag,” became ragtime’s first and most influential hit song. It has appeared in the soundtracks of hundreds of films, cartoons, commercials and video games. As it was listed on the White Star Line songbook, it may even have played on the ill-fated voyage of the Titanic.  In November of 1970, Joshua Rifkin released a recording of Joplin’s work that was nominated for two Grammys and effectively generated the Scott Joplin Revival.  In 1976 Joplin was posthumously awarded a Pulitzer Prize. 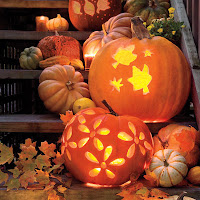 The first known use of the name Jack-O-Lantern was in Nathaniel Hawthorne’s Twice Told Tales in which hiding the ‘Great Carbuncle’ in your cloak might make you look like one. Whether you believe in Irish folklore such as Stingy Jack or entertain notions of ghostly orbs over influential places, cutting up and mucking out a pumpkin is just great family fun!

Junk drawers. I’m pretty sure we all have at least one. I’m absolutely sure most are more organized than mine ;-) But they sure are handy for storing everyday things that you wouldn’t put in your silverware drawer. Or for stashing things you don’t feel like putting in its proper place just yet. And yes, for losing things you forgot you put there. Still and all, Junk Drawers are one of the first places an intrepid Estate shopper will look in search of buried treasures. In fact, I once had to remind a zealous bargain hunter that the drawer itself had to stay with the house!

Any thoughts? Can you add to the list of things we appreciate that begin with the letter J?
Posted by diedre Knight at 1:30:00 AM