Friends of the Famous - V 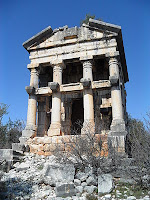 Rather than regale you with the story of the Roman poet Virgil, who was so incensed when his land was to be considered eminent domain unless he had a family member buried on it that he constructed an elaborate mausoleum wherein he laid to rest a housefly, thus saving his land from the greedy hands of the government,

I share with you one man’s humorous and poignant journey with a “non-friend” cat he called Valdez.

I took Bob Valdez for a last ride on Tuesday. When I carried him out to the truck, he wanted to know where we were going. It was a rhetorical question. It's hard to fool a cat.

I answered him anyway. "We're going to the vet's."

Sick and hurting, he still wanted to drive. I unlatched him from the steering wheel and put him on the passenger seat. He crawled onto the back and perched next to a headrest.

We didn't go straight to the vet's. I drove Valdez around the neighborhood for a last look. Yellow eyes studied the old ambush sites where he murdered anything that came by smaller than a dachshund. There was the tree he stayed in whenever my wife kicked him out over some felony to the furniture. Lately, he'd become incontinent and increasingly defiant. We would come home and find his business in a closet. He'd lie and say the dog did it.

His politics had shifted. A staunch Democrat for years, Bob had started tuning into McCain/Palin ads. We both had. But where I was only looking at Sarah, Bob actually seemed to be listening to John. I had no idea how old Bob was. He showed up at the house one day 11 years ago and just moved in. We never became what most people would call friends. Ours was a relationship based on a mutual distrust of most things.

His worst foes were grandkids. He'd lay into them if they got too close. It was hard to blame him. You wouldn't like someone twice your size towing you around a hardwood floor by your butt, either.

He attacked our youngest granddaughter a couple of weeks ago, leaving a long scratch at the corner of her eye. And that, as they say, was that.

When I pulled into the vet's, Bob climbed off the seatback and into my lap. He'd never done that before. I patted his head. He hooked his claws into my legs. "You know," I said. "Mice in heaven are fatter and the dogs are dumber."

"Who cares?" he replied. "Only morons go to heaven. I'm going to hell. That's where the action is."

I carried him inside. In an exam room, the vet checked Bob over. We discussed the options, all of them delaying tactics against a growing agony. Bob sat in the window and ignored us.

When the time came, I told him I was sorry.

I have no idea where cats go when they die. Maybe like people it's to different places. If so, I'm probably going to see Bob again.

No questions this time folks, but I’d love to know your thoughts.