Friends of the Famous - U 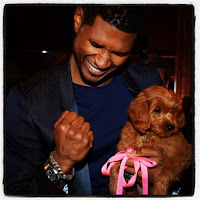 As a rapper, singer, songwriter, dancer and actor one might assume Usher couldn’t impress us more. But there is just one more thing, his dog. And not just any dog, it’s a Goldendoodle! A cross between a golden retriever and a poodle these hybrids inherit the best of both breeds in friendliness, liveliness and loyalty without as much shedding. These popular designer pups are fast becoming staples in affluent homes with children and often serve as guide, therapy, search and rescue dogs. But of course, they’re not cheap. Breeders get anywhere from $1800 to $3000 per Goldie poo and Usher paid upwards of $10,000; outbidding all others at an auction for which proceeds go to building schools in impoverished nations. 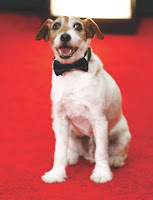 Having exasperated two former owners with sheer exuberance, Uggie was headed for the pound when trainer Omar von Mueller decided to take a chance and see what could be done with the wild Jack Russell Terrier. It didn’t take long for von Mueller to agree to keep him.  Under von Mueller’s professional guidance, Uggie appeared in commercials, toured in The Incredible Dog Show (he rode a skateboard) and got his first named role as Queenie in the romantic drama Water for Elephants before at last garnering mass-media attention  with his role in the silent movie The Artist, in which critics claim he stole every scene! He was later named Nintendo’s first-ever spokesdog, and put his paws in wet cement on the Hollywood Walk of Fame.

Acclaimed spoon-bending illusionist and self-proclaimed psychic, Uri Geller shares his unique pet observations on his website urigeller.com “All my life I have owned dogs, and I know the unconditional love I receive from them is like a healing energy. Being with my waggy friends fills me with vitality and high spirits. This bond is often so close it becomes telepathic. Once, as a teenager in Cyprus, I was exploring some hillside caves when I realised I was lost in the labyrinth. My matches ran out and I thought I would starve there. I desperately wished my little dog Joker was with me – and suddenly he was. How he found me, I’ll never know. But he led me to safety and, ever since, I’ve never been without a dog called Joker.”

Would you have a Goldendoodle?  Have you seen the films Uggie was in? Do you believe in pet telepathy?