Friends of the Famous - T

On a chilly day in December a police officer had no idea what to expect when responding to a 911 call in which only silence was recorded on the line. Upon entering the home the officer was astonished to find the homeowner on the floor beside his wheelchair and the owner’s cat Tommy across the room near the phone through which the 911 operator still intently listened. The owner explained that he’d fallen out of his chair and without much hope had instructed the cat to use the phone. 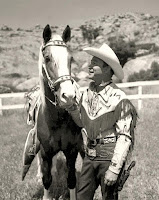 Before the start of his first career-making film, Roy Rogers was asked to choose one of the horses owned by the studio for filming. Three was a charmer when Rogers picked Trigger because he handled so well and could “turn on a dime and give you some change”. Throughout 80 films and over a hundred television series episodes, Rogers never failed to give credit to Trigger for his unfailing performances. Trigger quickly became the most famous horse in film entertainment, and his knowledge of over 150 tricks and the ability to haul Rogers up multiple flights of stairs for visits to hospital-ridden children didn’t hurt his off-screen image one bit! Trigger does in fact have his prints on the Walk of Fame, right next to those of Roy Rogers.

There were many courageous heroes that night of 1912 when the unsinkable Titanic tragically did just that. This is the story of one you may not have heard about. There were eleven dogs on board the Titanic, but only four survived.  When one of the surviving dogs, a Newfoundland named Rigel, found himself swimming beside Lifeboat #4 when it was separated quite a distance from the other lifeboats and unnoticed by the rescue ship Carpathia; which was bearing down on the small boat, he sprang into action. The passengers of the lifeboat were too weary to call out, but Rigel was able to bark for attention and in swimming in front of the small craft, revealed its location to the rescue ship.

Is your cat a genius? Did you watch the Roy Rogers series? Have you seen the movie Titanic, starring Leo DiCaprio and Kate Winslet?