Friends of the Famous - S


“A fiery horse with the speed of light ......Out of the past come the thundering hoofbeats of the great horse Silver” 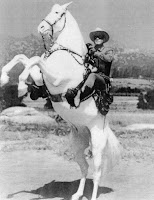 Clayton Moore (aka The Lone Ranger) hand-picked the majestic, 17-hands high stallion named White Cloud from a San Fernando Valley ranch as his noble mount, Silver in the 1949-1957 television series. And though the stallion had an impressive rear stand and a gentle disposition, a Silver #2 had to be hired to do the galloping chase scenes. Nonetheless, Jay Silverheels (the Native sidekick, Tonto) contends he often had to reign in his own horse, Scout as they loped into the sunset, to keep from leaving the masked rider in a “cloud of dust”. Intended as a family-friendly show, in addition to the exclusive use of silver bullets (precious metal metaphor for precious life), strict rules were written into the storyline, such as the Lone Ranger did not smoke or drink and spoke only in perfect diction (ostensibly for the benefit of young viewers), though some were led to wonder where the Ranger obtained his education. Both Clayton Moore and Jay Silverheels are honored on the Hollywood Walk of Fame although Moore is the first actor ever to have both his name as well as that of the character he played listed. But alas, there is no mention of Silver or Scout on the Walk of Fame. Thankfully, as you’ll read in a later post, stellar stallions do eventually get noticed.

Smokey – the Yorkshire terrier aka Angel from a Foxhole was found abandoned in the New Guiana jungle (WW2), and adopted by American Corporal William Wynn. The spunky little gal proceeded to astonish everyone by earning 8 Battle Stars for outstanding performance in 12 combat and 12 rescue missions and helped build a much-needed airbase in Luzon by running telegraph wire through 70 feet of pipe by herself! 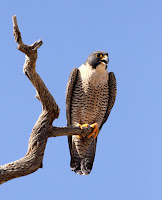 Thanks to the brilliant minds at the National Institute of General Medical Sciences, engines of Super Sonic jets are now structured to work like the nostrils of Peregrine Falcons in a speed dive. Clocked at speeds of 200 mph, the birds are able to breathe with the help of tiny cone-shaped protrusions within their nostrils which guide airflow.

Did you watch the Lone Ranger? Do you know any animal heroes? Have you ever seen a falcon in a speed dive?