Friends of the Famous - H 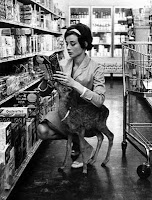 In the 1959 movie Green Mansions, Audrey Hepburn’s portrayal of the fey and mysterious woman from the jungle captivates the heart of the leading man, but his wouldn’t be the only heart lost to love. While filming the movie in the Amazon jungle, Hepburn’s own heart was stolen by a fawn; given to her by the animal trainer during filming. The fawn, which she called Pippin, would remain her cherished pet for years to come; allowed to freely roam her estate, accompany her on shopping sprees and sleep in her bathtub.

America’s 23rd president, Benjamin Harrison did not win the election by popular vote but by electoral vote; beating out incumbent president Grover Cleveland. Harrison then moved into the White House with seven family members, a cook, a goat named “Old Whiskers”, two opossums and a dog named Dash, who adored the ‘human iceberg’ president.  Although Harrison claimed no pet as his own, lest it tarnish his image, Dash had certainly made up his mind, and followed the man everywhere J Limited funding for renovations aside, the Harrisons were the first to install electricity in the White House, but fear of electrocution had them sleeping with the lights on until the contractor returned and turned them off. Harrison became the first incumbent to lose to a former president when Cleveland regained the presidency in 1892. Interestingly, neither Harrison nor Cleveland campaigned during the election; relying instead on surrogates. 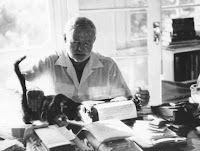 It’s almost a foregone conclusion that a writer has pets, but Ernest Hemingway took it to a whole new level with not just one, but dozens of cats! And not just any cats, the majority of them were (and are) six-toed. At last count there were an estimated fifty-some still roaming the grounds of Hemingway’s home-turned-museum in Key West. Florida.

One of the first cats to roam around the White House was a six-toed cat named Slippers; owned by Theodore Roosevelt. 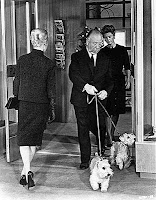 With Alfred Hitchcock’s penchant for cameos, it’s no surprise that two of his treasured Sealyham terriers also did one, leaving the pet shop with Hitchcock at the beginning of the Birds in 1963.

Have you ever kept a pet in the bathtub?  How many animals have you ever had at one time? Have you seen Alfred Hitchcock’s movie The Birds?