Friends of the Famous - D

The Raven might have been Poe’s best work but the inspiration and real-life version called Grip belonged to someone else. Indeed, highly acclaimed for such timeless novels as A Tale of Two Cities, Charles Dickens had a side that not many knew. For instance, in addition to the family pet raven, a cat named Bob was his constant companion for many years; following Dickens around the gardens, patiently watching him write for hours on end and upon occasion (according to some), going so far as to snuff out the candle when it was clear his friend needed rest or, Bob just craved attention.  Consequently, upon Bob’s demise the devastated Dickens had one of Bob’s paws taxidermed and attached to an ivory blade to be used as a letter opener.
“What greater gift than the love of a cat” ~ Charles Dickens 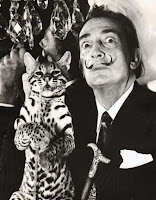 Renowned painter Salvador Dali may have had good reason for being a bit eccentric and engaging in unusual and grandiose behavior; having been taken to his brother’s grave (by his parents) as a very young child and told he was his brother’s reincarnation. Dali harbored the unusual concept throughout his life and later embedded the image of his long-dead brother in some of his artwork. In addition to his pencil mustache, Dali professed deep respect for cauliflowers; for their “logarithmic curves” he explained, and once drove from Spain to Paris with his entire Rolls Royce filled with them. He was often seen with an anteater on a leash, but that was before disrupting a game of ‘What’s My Line’ by repeatedly giving misleading answers (to be fair, he was immodestly sagacious), which caused the host, John Daly to intervene before the contestant up and quit the game!  By the sixties, Dali had acquired a treasured friend in an ocelot he called Babou that accompanied him everywhere, including a Manhattan restaurant where Dali was overheard assuring a distraught customer that the cat was really a regular feline painted to look exotic.
“We resembled each other like two drops of water but we had different reflections” ~ Salvador Dali 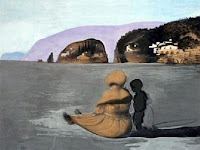 Do you have a keepsake of a past pet? Would you take a pet to a restaurant?