Friends of the Famous - C 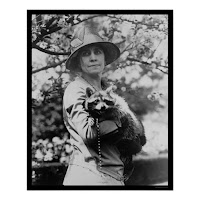 America’s 30th president Calvin Coolidge and his wife were well-known animal lovers and as such, pets were constantly being bestowed upon them from colleagues and international dignitaries alike; not that the Coolidge family minded.  They dearly loved their animal friends, including cats, dogs, a baby bear, a white goose, a pygmy hippo, a wallaby and a bobcat – to name a few. Yet, Calvin Coolidge did have a favorite; a raccoon he called Rebecca, whom he walked around the White House on a leash every day.  Once, during renovations at the White House Calvin Coolidge worried Rebecca might get lonely and sent a limo to bring her to where the family was staying!

Stricken by Bell’s palsy at an early age, George Clooney not only recovered but was later nominated by People magazine (twice) as the Sexiest Man Alive.  Not surprisingly, folks gaped in wonder when the Oscar-winning star of TV’s E.R was seen around town with a 300 pound best bud.  Max, as Clooney called his pot-bellied friend, was often spotted riding shotgun with him on afternoon cruises with the top down. The relationship lasted nearly two decades before Max passed away and Clooney now owns a dog named Einstein. 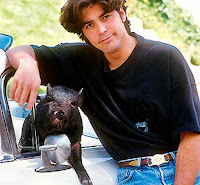 The academy award winning star of “Leaving Las Vegas” is clearly not one to back down from a challenge. Known for his intense on and off-screen personality, the only issue actor Nicolas Cage admits to having with his favorite (among several) Cobra friends is that the feeling is not necessarily mutual and it constantly tries to hypnotize him.

Sharing is part of life for many pet owners, as renowned rocker Alice Cooper well knows when he and his pet boa constrictor, Christopher enjoy watching football and Ghost Hunters with the family, of an evening. However, Cooper says he wishes his friend would act a bit more terrifying at concerts.

Do your pets travel in style?  Would (could) you watch T.V. with a snake?