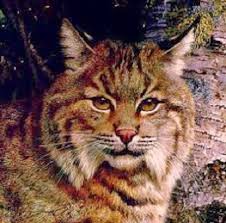 B is for Bobcat—these highly adaptable creatures can be found throughout the continental United States, and here in Arizona they range from the desert lowlands clear on up to the whispering pines in the north. Smaller than the Mountain Lion, Bobcats have uniquely pointed, blacked-tipped ears, distinctive spots and of course, the bobbed tail.  They lead solitary lives (except when mating) and pretty much remain out of sight unless they’re sick or hungry. They are prone to the rabies virus and can become quite aggressive when afflicted, (best advice if confronted is to stand tall, jump up and down and by all means, yell your head off!), and they’re known to devour small pets when natural resources run low. In their defense, I’ve only had them stopping by for a drink out of the dog’s water bowl in especially dry summers…

These dangerously cute little fellas were really making the news not long ago because they seemed to be infiltrating neighborhoods at an alarming pace. For a time there was talk of relocating them.  But the talk soon turned to land conservation, whereby restoring the natural resources which support the wildlife habitats.

Next thing ya know, they are re-introducing Bighorn Sheep to the Santa Catalina Mountains to assist in the conservation effort and replenish a once abundant amount of Bighorns meandering through the mountains.  (Before the mass-construction era, they were quite plentiful and could often be seen near canyon trails in the early mornings or evenings.) The jury is still out, but a huge debate began after the occurrence of a couple of highly controversial events ; it seems that mountain lions preyed on a couple of Bighorns (unforeseen?) and the agency responsible for the Bighorns responded by shooting the mountain lion (s).  How did they know who to shoot? Did they use a breathalyzer?

Update: All is quiet of late, no less than fifteen Bighorn lambs have been spotted, there haven’t been any further big cat shootings and no one even talks about the Bobcats anymore!

How’s the wildlife in your area?

Email ThisBlogThis!Share to TwitterShare to FacebookShare to Pinterest
Labels: A to Z Challenge, Arizona, Wildlife