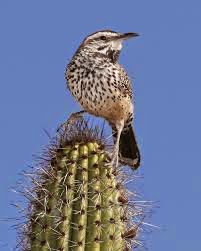 C is for Cactus Wren! These busy little songbirds are Arizona’s reigning State Bird, though I imagine their schedules don’t allow for many promotional engagements as they stay fairly occupied providing for an extensive amount of offspring.

These are highly inquisitive and nearly fearless creatures which are not above poking around inside your car if there’s an open window (they love hair ties) or charging after any critter that threatens them. But really, they’re sweet :-)

Identifying marks include a white stripe behind each eye that extends to the upper backs, a curved beak and handy longish legs (You’ll see why a little later). Their distinctive ‘song’ is similar to the sound of a small car with a bad starter.

As the female sits on one clutch of eggs, the male is busy building another nest for the next batch, and so on. While components of the nest are your typical grass, twigs and feathers, one resourceful wren saw fit to unravel (strand by strand) a good portion of an old patio rug we used to have.

The football-shaped nests are cleverly built within the thorns of the majestic Saguaro cactus (thus the handiness of longish legs!); not only for the protection of their young, but for carefree roosting no doubt.  Of a handful of predators, only the Whipsnakes are able to navigate through cactus to devour the eggs. Larger predators include the coyote, bobcats, domestic cats and larger birds such as the treacherous roadrunner. But don’t be fooled, these hardy birds are relentless protectors and any predator caught in the act of nest-picking is promptly pecked half to death before slinking off empty-handed, into the sunset.

While not on the endangered list, Cactus Wrens (as all songbirds) are protected by the Migratory Bird Treaty Act; which is peculiar for a non-migratory bird…must be their lovely ‘song’!

How about you, any songbirds in your yard?
Posted by diedre Knight at 1:30:00 AM