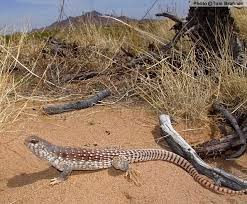 I is for Iguana!  Though not quite the largest lizard in North America, the Iguana grows to an impressive 16” long (including its’ tail).  Found in sandy areas where creosote bushes are plentiful, yet wide-open space is at an optimum, these solitary creatures thrive for up to ten years.

I’m partial to creosote bushes myself, as I love the way they smell when it rains.  But for the Iguanas, creosote bushes provide not only shelter but most of their nutrition as well. They are known to eat an occasional insect when seeds and flowers from the creosote are not as plentiful.

Another less-popular source of shelter for Iguanas is abandoned Kangaroo Rat burrows which provide ample shelter for a couple months of hibernation.

Excellent eyesight allows the Iguana to spot both prey and predator from extensive distances and though generally docile, they have strong jaws and sharp teeth that can cause serious damage (not to mention pain!) when threatened. However, they are not venomous.

The coloring of the Desert Iguana changes daily, between a darker brown and gray in the morning to absorb warmth, to nearly white by early afternoon to reflect the sunlight.  Interestingly, they withstand temperatures in the open long after other lizards have sought shelter.

They are frequently referred to as “Speedy Gonzales” due to powerful back legs that propel them swiftly across roads and flatlands at estimated speeds of 10-15 mph! Just as depicted in cartoons, the Iguanas really do run upright; tucking their front legs close to their bodies as they flee cars and other predators.

Iguanas are not currently endangered, though in some areas their numbers are diminished by habitat destruction and reptile enthusiasts (evidently, Iguanas are hard to care for in captivity).

Would you have an Iguana for a pet? Would you mind seeing one in your yard?