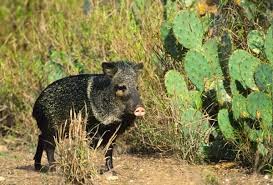 J is for Javelina!  Contrary to popular belief, these homely critters are not related to the pig or rodent family. Referred to as “New World” animals, these hooved mammals are part of the Peccary family.

Thought to have originated in South America, Javelinas are relatively new to the United States and are swiftly widening their range northwestward.  They currently inhabit areas of Arizona, Texas and New Mexico.

Out west they’re called Javelina; Spanish for javelin or spear; in reference to their large tusks which
sharpen themselves each time the mouth opens and closes. (Sandpaper lips?) 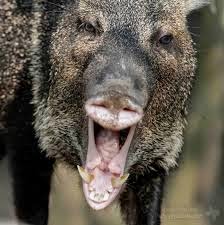 Other identifying characteristics are the dark gray coats peppered with darker gray patches and a faint white collar.  Their hearing is much better than their sight and they can’t sneak up on you because you can always smell them coming, thus the nickname “Skunk Pig”.

Javelinas are territorial and travel in groups of six to as many as fifty and can often be seen marching right down the middle of a neighborhood road, pausing to upend an occasional garbage can or peer through a window.

We actually had a pack of eight or nine circling our truck when we returned from the grocery store one morning. Though I was willing to sit in the truck till sundown, my husband was brave enough to wade through them; grocery bags held high above his head! 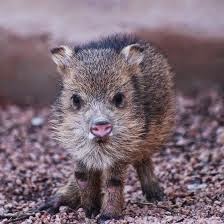 This poor little guy got into some jumping cactus!

If, judging by their appearance, you would think they’re not tasty—you’d be right! However hunting permits are issued in both spring and fall here in Arizona. Archery is a popular method for hunting and firearm usage is somewhat limited, but either way, if predators such as mountain lions and coyotes don’t get them, hunters will; ostensibly for their hides.

Anyone live in Javelina country? 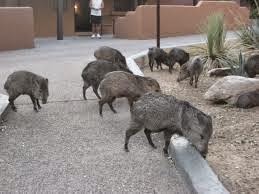