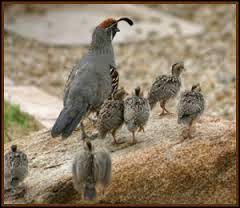 G is for Gambel’s Quail!  Few critters can stop traffic they way these guys do when Mom and Pop dart across the road with six or eight little ones trailing behind!  I don’t think they mean to be annoying but it seems that once one starts across, he better be committed because going back would mean running into his own on-coming traffic! Instead they cross the road (usually) single file; all the way down to the last teeny tot.

The males definitely have all the looks with their majestic plumes (though some call it a Jester’s cap), 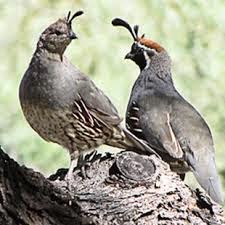 while the females have only a stub of a crest that resembles the Dennis the Menace do. But these guys are indeed monogamous, and seem to embrace family so much that one covey easily becomes a regular commune that enjoys community dust baths!

Generally ground-dwellers; they only explode into short flights when frightened or startled, and feed on seeds, leaves and berries – anything that also provides moisture as they require a lot of water.

Their roost of preference is typically in dense shrubs and trees that provide good cover from predators and probably peace of mind at night.  In the morning, after a scout has been dispatched, they plop from the shrubs and low trees like plump, gray apples before breaking into a brisk, purposeful stride to wherever breakfast is served.

Just because I think these birds are pretty cool doesn’t mean everyone else does; their list of predators is extensive and includes snakes, raptors, foxes, bobcats, coyotes and humans. Yes, I said humans (sniff!); hunting season for this quail species runs from October through mid-February with a 15-bird bag limit.

After that somber note, here’s a Fun Fact!  Many quail chicks are precocial, meaning they are mobile and mature enough to cruise with their parents right after hatching!

So, Anyone live in quail territory? Glad to see so many still hanging in there for this Blogging A to Z April 2015 Challenge!