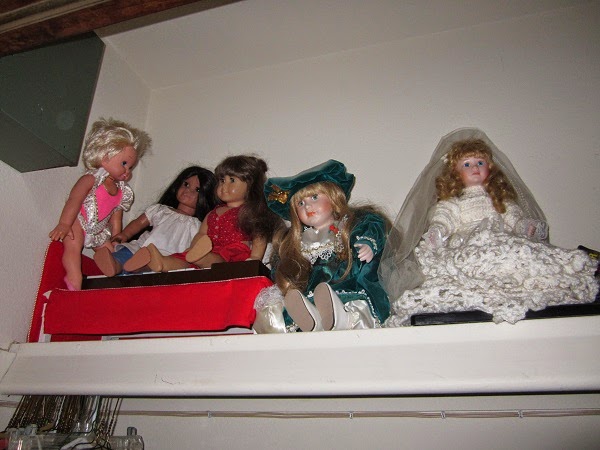 I was putting away the sleeping bag my grandson uses for sleep-overs the other day, when I noticed on the shelf of the seldom used closet sat five of my daughter’s favorite dolls (from back in the day), just sitting there… collecting dust.

I felt a pang of sorrow for the loss of those precious days when, besides me, those dolls were her only world. How dare she leave them behind to remind me! And yet there was something more; an odd sense of having forgotten something.  Had I left the iron on again? Was it trash day? And then it hit me – no, it wasn’t trash day and I would no more throw my daughter’s dolls away than discard any of my own precious treasures – my stories!

Sure, my daughter left five dolls on a shelf, but I have five books in various stages of completion.  Gulp. Was I ready? I wondered. Was now the time to ‘do it or die’? She had moved on, so why shouldn’t I?

What I like to do in times like those is console (or bolster) myself by reading some of my favorite bloggers, one of whom, Quanie, - check her out- she’s a hoot and a half!--Anyway, in the course of relaying an astounding story of a bad review gone 'Misery', Quanie talked about the joys and agonies of publication. She mentioned the number five, as well. So naturally, I keyed on that like a cat to a penlight beam!

Not wanting to give away Quanie’s amusing stream of logical inspiration, I’ll just say that I came away more than inspired; I came face to face with an issue I avoid as if it were the very edge of a cliff – and for someone who white-knuckles elevator handrails – it’s a pretty big deal!

Marketing? Not so bad. Self-marketing? Ack! I can brag about someone else all day long, but when it comes to me, well, wouldn’t that be rude? Horse-feathers, say those in the know.

The upshot of this whole spout-off is to announce I will be dusting off my five and pushing them out the door!  After some unintended disasters during the course of publishing my first book (I’ll elaborate on that in a future blog), the next ones should be a breeze.

Can I get a couple of High Fives? No pun intended ;-).

So, what's your motivation? And how do you keep it going?