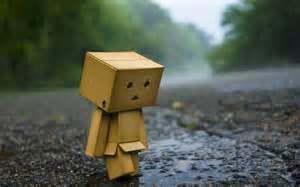 With all the talk these days about thinking ‘outside the box’, I wonder if perhaps we should spend just a little time considering, not so much the ones that won’t, but those who can’t; those silent masses stymied by stigma because their eyes can’t light with utter delight, those to whom laughter means naught but sound in a world where hugs are so few they are often recoiled.

Whether diseased or disabled, the depths of despair within a muddled mind are seldom pondered by the forward-thinking, out-of-the-box folks as we go about our normal lives. But imagine for just a moment the positive impact of a genuine smile, a friendly nod, a warm hug and ask yourself Is it worth it?  I’ll bet you’ll find it is.

Ironically, not every special, in the box person is easily recognized until something triggers an all too often, tragic display of utter despondency.

With that in mind, here’s a flash fiction inspired by the image above:


Killing Peebs
Tensions had been building for years, but the last two had been the worst. As if old man Peebles hadn’t been bad enough, he’d up and died; leaving his devil’s spawn of a son in charge of the business. Peebs, as they called him, was a foul-mouthed slug who repulsed office personnel and relentlessly bombarded the warehouse crew with criticism in the form of personal attacks.
No doubt about it, Peebs had to go. And they weren’t about to wait for this one to die, they were going to hasten his demise. A timid guy named Paco had a gun but not the nerve. Everyone else on the crew had the nerve and the urge so they had a secret drawing for the lucky shooter. The time would be at the shooter’s discretion.
When the explosive shot rang out one particularly tense morning a joyous cheer went up in the warehouse, gleeful hoots could be heard from the office.  Triumphant high-fives slapped above comical victory dances while, in the mechanical room where a forklift tire had just blown, Peebs wondered what the hell the ruckus was about and Paco lay dead on the bathroom floor.  ~

And holidays are the worst. At a time of year when the sense of comradery and belonging is heightened, the special ones feel that much more isolated.

As we gather with friends and loved ones to share this season which brings so much joy, may we all hold in our hearts the compassion to realize that it’s possible that each and every one of us knows at least one somebody somewhere who will be alone during the holidays. Why not check in on them, in person, if possible? Enliven a life while enhancing your own.

One year I had a transportation service bring my grandmother, who suffered from among other things, Alzheimer’s, to Thanksgiving dinner at our house.  The driver who brought her to the door in her wheelchair had evidently made quite an impression on Grandma because she invited him in to eat with us. We set another plate and enjoyed one of the most memorable Thanksgiving dinners we ever had!

During the next couple of years I came to know Max the driver, quite well as Grandma refused to ride with anyone else and I couldn’t blame her. Max lived a long and mostly happy life it seemed, with the exception of the lasting sense of deep remorse and personal failure at the suicide of his first wife. He never forgave himself for not knowing, not doing more.

Though Max and Grandma have both passed on now, I like to think that they’re still friends.

Your thoughts and comments are most welcome. Have you had a ‘helping’ holiday? Will you?