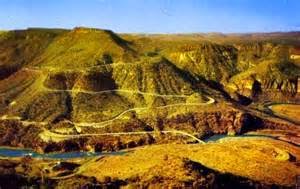 In our family every vacation turns into an adventure somehow, and each of us comes away with our own assessment of the highlights…

On a typically searing summer day, just after noon, Angel’s father picked her up from summer day care and the two headed north to the beautiful Arizona White Mountains for a long weekend of camping and fishing.  I would follow after my work week ended.

A stop for fuel in the small town of Globe helped to break up the four hour drive and the two travelers agreed to have an early dinner at the bottom of the Salt River Canyon. After hiking down a rugged trail to the bottom with our two dogs and exploring the river’s edge, they dined on chips and sandwiches at a cracked and graffiti-laden concrete picnic table.

They were munching contentedly, admiring the scenery, when Angel chomped on a corn chip and the tooth which had been wiggling for days - fell out! Her father laughed and remarked on how different she looked with a space between her teeth. Angel raced up the trail to the parking lot to see her reflection in the Camper’s side mirror and giggled.

Shadows grew quickly as they began the winding ascent of the canyon’s northern side, traveling ever deeper into the wondrous woodland of Ponderosa Pine. But it was nearly
dusk before they’d reached White River, and weary from the drive, the two looked forward to arriving at the camp site where they knew friends and fellow campers were expecting them. Suddenly Angel exclaimed “I forgot my tooth! How will the tooth fairy know where I am?” she wailed.

One hour and 40 miles later - the tooth, still wrapped in a napkin, was miraculously recovered from the concrete table at the bottom of Salt River Canyon.

At last, beneath a star-studded sky, only ten miles from the campsite, her father eased the truck and camper to the side of the narrow rural highway; squeezing between two lumbering pines, to use the last available payphone to assure Angel’s near-frantic Mom (me!) that they were indeed just fine and Angel grabbed the phone, eager to impart the highlight of her day - “Daddy hit a tree!”

And then there are the imaginative adventures that spring from the scenery and leap on to the page as if chased by unseen demons…
Completely engrossed in thoughts of fleeing the city, his law practice, and the tempestuous redhead, Jacob barely noticed the scenery at all. His aging Jeep may as well have been heading north on auto-pilot as it navigated the switchbacks and hairpin curves of the Salt River Canyon. A little down time at the cabin was just what he needed and that thought alone relaxed the stiffness of his hands on the steering wheel until a body exploded through his windshield…
Except from ‘Canyon Crosses’ by diedre Knight