Happy Friday, Everyone! Though I’m not on a full-time work schedule anymore, I doubt I’ll ever stop appreciating Friday for much of what it stands for; the end of a school or work week, the beginning of the weekend. Most of the time, the anticipation alone could get me through the work week. Even if I had no plans.
But, who needs plans when something is always going on? For instance, unexpected snow flurries during Fireside chats, Folklore whispered in the glow of a Flashlight in a backyard tent or Flying Kites in Fragrant meadows. Meeting Friends and/or Family for French Dips and Fries is one of my favorite things to do.

Unless, of course, I’m discovering a new “must-see” Arizona destination. Fossil Creek is one such place. From its springs near the Mogollon Rim, headwaters emit upwards of 20k gallons per minute year-round, making it the 4th largest producer of Travertine in the United States. 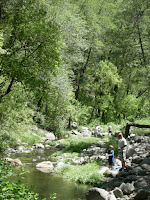 Then again, I don’t mind filling up a Flash drive with photos and thoughts while the boys go out with their Fiberglass Fishing rods and bring back something for dinner. By that I mean Fried Chicken from Eddie’s Market ;-) 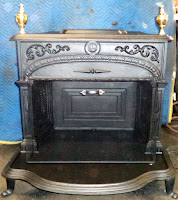 While efficiency may have been foremost on his mind, safety wasn’t far behind when, in 1741 Benjamin Franklin created the Franklin stove, a revolutionary innovation he declined to patent, which was later improved upon by David Rittenhouse with the addition of a chimney. It was during that same time that Franklin also established America’s first Fire Insurance Company.


By the way, those stickers they put on fresh Fruit at the grocery store aren’t edible. Not that I ever thought they were, but it’s recently been confirmed by a young close friend ;-)

Any thoughts? Can you add to the list of things we appreciate that begin with the letter F?