Nothing seems as distant as your destination when crossing the desert in summer. Sometimes even a brief stop at a ramshackle gas station proved refreshing when we could run inside and take turns standing in front of the fan on the counter while grandma pumped gas out front.

Of course, back in the day, I’m about to tell you about, there were no gas stations. Anywhere. But there is a place where you suddenly glide down from the menacing high desert mountains into a veritable wonderland of flatland grass and a natural spring. No wonder everyone stopped there. 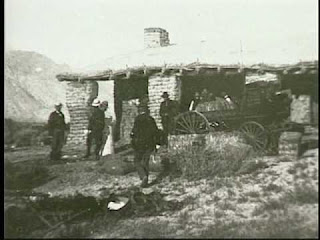 Nestled in the heart of ‘earthquake valley’ in the Anza Borrego desert are remnants of a once bustling stagecoach station called Vallecito (little valley), where weary travelers and their burros could rest and replenish water and supplies.  However, having come through the ‘journey of death’ across the unforgiving desert, many weren’t able to go any further. 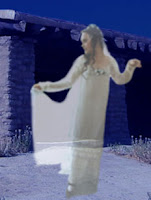 Such as the Lady in White, who was assumed to have traveled cross-country alone to meet her prospective husband (some speculate she was a mail-order bride), only to die of exhaustion and dehydration in a back room of the station. Although she was buried in a wedding dress found in her suitcase, and hers is one of only three gravesites in the old cemetery, her restless spirit is said to roam the valley ridges on moonlit nights, an unsettling vision; in tears, and flowing white.

As the first official transcontinental route (between Yuma and San Diego) for stage lines and emigrant caravans alike, especially during the Gold Rush days, Vallecito became a principal stop for the antecedents of the Pony Express, though back then it was called Jackass Mail. 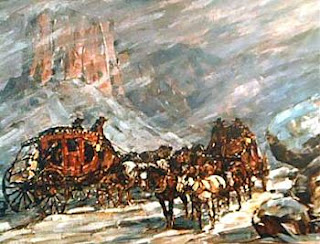 While the stagecoach that ran between Carrizo wash and Vallecito station is of small note in history these days; stories abound of sightings of four mules pulling a coach with a driver who sits slumped over. If by morning you’re not sure you saw what you think you did, wagon wheel tracks in the deep, soft sand are quite convincing that someone (perhaps the mailman?) wants the trail to remain open.

And then there are the fireballs. Reportedly seen (since as far back as 1858) north of Vallecito station as burning balls; projecting soundlessly up and exploding into cascading flames that light even the darkest of night skies. If there is an explanation for these sightings, I haven’t found it. But, as one local historian puts it; “Don’t gaze long into the darkened night…for something is undoubtedly looking back.”

Do you have a favorite road trip memory? Would you camp in earthquake valley? What do you think those fireballs are?

Anza-Borrego Desert State Park
Posted by diedre Knight at 2:30:00 AM