After a few work related detours, I’m back on the road again! To my delight, my first stop happens to contain more than a 100 covered bridges! Can you imagine my astonishment when I discovered there is (according to reports) at least one covered bridge still standing in at least 30 states, and I hadn’t ever seen – let alone been on – one?

It comes as no surprise that the legendary Von Trapp family chose to settle in the boreal forest ridges of Vermont where every season bursts in festive dress; as it reminded them of the Alpine setting of their homeland. Known for Dairies, lakes and Ben and Jerry’s Ice Cream, Vermont is also the largest U.S. producer of Maple syrup and (at one time) Marble; the legacy of which still remains in the form of sidewalks. Wow. 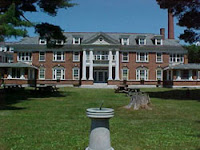 At one time, it was illegal to tie a giraffe to a telephone pole, though other changes are slower to come about. For example, the Police Academy in the town of Pittsford has a unique recruit in the form of Nurse Mary; who’s been there since the building served as the State (mostly tuberculosis) Sanatorium.  Though Mary eventually succumbed to the disease herself, she was and evidently remains compassionate, as she reportedly continues to respond to late night buzzes on the antiquated call system installed in every room.

Moving on to Massachusetts, there are a few special laws to be aware of, such as no Gorilla shall ride in the back seat of any car, snoring is prohibited unless windows are shut and locked, and mourners may eat no more than three sandwiches at a single wake. They may have had my next stop in mind on that last one. 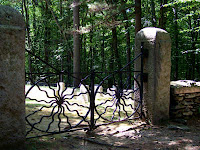 Secluded in the verdant fern and grassy woodlands of Leicester is a cemetery called Spider Gates. This atmospherically pleasant place might well be a public park; if not for the dear departed resting there. The name describes entrance gates of iron that do resemble spider webs (some say sunrays), though the official name is Friends Cemetery; owned and maintained by the Quakers. There’s a well-worn path in the earth around the grave of Marmaduke Earl, where walking ten times around at midnight is said to bring good favor and sometimes whispers from the spirit himself! Beyond the majestic hanging tree and alter, the low stone wall which surrounds the cemetery is often dotted with assorted coins for the ferryman; as it and stands before the path to Kettle brook, rumored to actually be the River Styx.

Is there a covered bridge in your state? Have you been or would you visit either of these places? What would you say or write about them?

On a stone and marble bench at Spider Gates, sweet Mary nibbles a sandwich near the headstone of her only love and fondly recalls the last kiss they shared in the shelter of Emily’s Bridge before she’d hurried off to her duties at the Sanatorium and he never made it out.