Friends of the Famous - M

Originally written as a memoir by John Grogan: Marley & Me; Life and Love with the World’s Worst Dog was a New York Times bestselling book before it hit the theaters as a comedy-drama starring Owen Wilson and Jennifer Anniston.  Although it broke box office records on its Christmas Day opening of 2008, the film was received with decidedly mixed reviews, though none could deny it was sure to please every dog lover.  The role of Marley, the exuberant canine pet, was played by 22 different yellow labs as the film covers fourteen years of the wayward dog’s life and how his presence indelibly affected the lives and love of a young couple.

Best known for her role in the long-running sitcom ‘Will & Grace’, popular television actress Debra Messing has received countless Emmy, Screen Actors Guild and Golden Globe awards and nominations, including five Crown Awards for her trademark curls. With dozens of television shows and movies to her credit – and a new one due out in 2016 she does keep busy when she’s not at home relaxing with her son and an adorable little dog called Laila; a purebred called a Coton de Tulear; named for the city Tulear in Madagascar and for their white cottony fur. They are said to be the most honest dog for characteristics such as affectionate, loyal, even-tempered and all-around friendly with children, other animals and people in general. Their expressive faces only add to their innate charm as they like to dance upright on their hind legs. 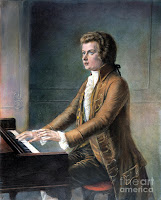 Mozart had a Starling he affectionately called “Little Fool”. He loved the bird for its ability to mimic Mozart’s own melodies and unconfirmed reports are that Little Fool even inspired some of his later work. Upon the bird’s passing, Mozart held an elaborate funeral which included the reading of an anguished hand-written epitaph in honor of his beloved friend.

Have you seen the movie ‘Marley & Me’? Have you ever known a ‘Coton de Tulear’? Are there Starlings in your area?