Friends of the Famous - A 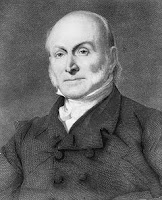 Preferring trousers to knee breeches and wearing his hair short instead of in a ponytail, John Quincy once accepted the gift of an alligator (another first) from Marquis de Lafayette. He kept his reptilian friend in the unfinished East Room of the White House and enjoyed showing it off to visitors. Possibly due to his wife (America’s only foreign-born First lady – to date), silkworms were also Friends of the Famous family. The production of silk is called Sericulture. Sadly, in the process they die; for the cocoons must be boiled.

Having kept a diary since age 11, by the time of his death John Quincy had amassed an impressive collection of first-hand accounts of the early American republic period; fifty volumes of which are kept at the Massachusetts Historical Society. ∞ 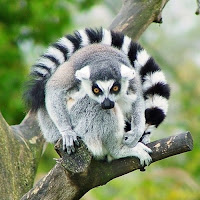 Emmy award-winning comedic actress and spokeswoman for Jenny Craig, Kirstie Alley has fourteen special ring-tailed friends called Lemurs, but she doesn’t recommend them as pets because they live to be nearly thirty years old, require a strict diet and constant care. Endemic to Madagascar, lemurs are considered one of the most endangered mammals on earth. Roman mythologists believed they were the restless spirits of the undead, which could explain reputed complaints from Ms. Alley’s neighbors. But Ms. Alley deems them “Zen”, spiritually speaking, and claims they even sit in the lotus position. ∞

As records go, our third and final friend in the A category is Adwaita; who made only one. Weighing in at a mere 551 pounds the Aldabra tortoise lived to be an estimated 255 years old, and believed to be among the longest-living animals in the world! ∞

Have you ever been given an unusual pet? Would you keep and alligator? Do you have any unusual pets?