There needn’t be a storm to clear the sand of castles when softly lapping waves produce the same effect. Deeming the endeavor hopeless after yet another unavoidable demolition, a young Mary Lou begged her father to one day build a castle where waves would never flow and he crossed his heart he would.

Boyce Gulley never forgot his promise. Though it appeared quite the opposite in the late 1920’s when he was diagnosed with Tuberculosis and advised he had only a short time left to live.

Telling no one of his illness or intentions, Boyce Gulley left his Seattle home and family for parts unknown for the next two decades; when his family received a summons from an estate executor requesting their presence in Arizona.

For it was there (here!) in the arid desert that he sought relief, if not a cure, for his illness and the perfect wave-less sand in which to build the castle of his little girl’s dreams.

Having purchased a ten acre plot of land upon his arrival, Boyce took up residence at the base of South Mountain in Phoenix, living at first, in an abandoned boxcar as he began a quest that would defy earlier predictions of his life expectancy (he lived another twenty years!) and boggle the minds of visitors for generations to come.

Building material consisted of anything he could find and drag home, reportedly with the help of his old mule, Jackson. This included telegraph poles, railroad ties, countless tons of natural stone and river rock and discarded things he deemed reusable such as Pyrex dishes and auto parts, for window frames. (Are you getting the idea that this place might be a bit eccentric?) 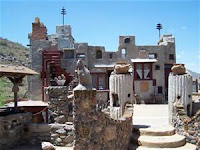 By 1945 Boyce had all but finished erecting his monument to Mary Lou, though didn’t live to know if she loved it. One can only imagine what (by then) a young woman might have thought of the massive 8000 Sq. Ft. edifice containing 18 rooms, each on its own level, thirteen fireplaces, an underground Chapel, Saloon and of course, a dungeon (Is any castle complete without one?) where a large iron alligator stands guard over the secret trapdoor of ‘Purgatory’; a small room located between the Chapel and the Saloon. (Mary Lou had to wait three years to find out what her father had left her in the secret trapdoor)

Other remarkable oddities include crenelated parapets, turrets and a tower overlooking the land through a wagon wheel. On a patio above the cantina there is a wishing well where one could drop their order in a bucket and receive a drink from down below. Hidden chambers abound, and the floor of one room was entirely laid in schoolhouse blackboards!

Settling in was a bit tough for Mary Lou and her mother for the first couple of years. Then, in 1948 a Life Magazine feature story dubbed it the “Mystery Castle”, documenting the momentous opening of the secret trapdoor; which contained gold, cash, letters and a photograph of Boyce Gulley, and sparking enough curiosity to support private tours which provided funding for water and electricity with a little left over to live on.

Mary Lou lived out the rest of her days at the castle; personally presenting guided tours with her signature whim and wisdom of the desert until her death in November of 2010. Tours are still being given weekly and only during the winter months.

It seems as though all this castle is missing is a ghost to roam the earthen corridors. And while reports of such are few and sketchy at best, they allude to unsettled feelings which could be attributed to the eccentric building and décor rather than anything supernatural.

But perhaps the hauntings simply haven’t started yet.

Who do you suppose would do the haunting, Boyce or Mary Lou?