How is that for a riveting title?

Today I am pleased to present the multi-published author and Muay Thai enthusiast, Sandra Cox with a peek at her latest release!  Let’s all give her a fiendishly big round of felicitations!

After just a few burning questions I’ll be turning the post over to Sandra as I run off to my daughter’s wedding :-), but I’ll catch you all back here with another adventure in apprehension for Alex Cavanaugh’s Insecure Writer’s Support Group on the 7th.

Burning question #1:
Whatever possessed you to write a story like this?

Great question.  Several years ago I was writing and half-listening to the news when I heard a quick blurb that someone had a ghost for sale on eBay.  I only heard it the one time and never heard it since. But the idea stuck, hence Ghost For Sale.

Burning question #2:
What is your favorite scene in ‘Ghost for Sale’?
I’d have to say the séance.  But anymore information would need a spoiler alert.

Burning question #3:
As a multi-published author, does a new release ever feel any less exciting than the first one, and why?

I had been writing many years before I received my first offer of publication. It would be hard to replicate the intense joy and excitement of that moment. Although… if someone offered me a contract with a huge advance, I’d be willing to give it my best shot. Grin.

Thanks for such a captivating interview :-)   The post is all yours, Sandra. Have fun and very best wishes! 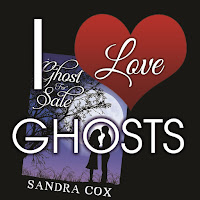 Warning: Contains ghosts and shopaholics
Blurb:
Caitlin King can’t believe that her shopaholic cousin actually bought two ghosts off of eBay. But she can’t ignore the truth when she starts seeing sexy Liam O’Reilly, who’s been dead for over a hundred years. He’s a fascinating specter, and the more time Caitlin spends with him, the closer they become—sending them both spiraling into a star-crossed tailspin. No matter how desperately they long for each other, there’s just no future with a guy who’s already stopped breathing.
Excerpt:
As we reached the car, my breath went out in a whoosh. Arms and legs crossed, Liam leaned against the shiny Corvette. The street lamp limned his high sharp cheekbones and sparked the blue highlights in his hair. Plain black cotton trousers framed long legs. My heart tightened and my bones loosened. He was just so darn pretty, in a manly-man sort of way.
His stormy eyes shifted to me. He stared, unsmiling.
The ghost was still in a snit. Well fine, I was in a bit of a snit myself.
We drove home in silence. I glanced in the rearview mirror. Liam stared straight ahead, his arms crossed, pensive. At least he wasn’t white knuckling the side of the car. How strange this must seem to him.
I surfed the satellite radio till I found a channel that played old Irish ballads.
A beatific expression came over his face, making my breath catch. How could a man be so good-looking? Maybe it was a ghost thing. His expression changed to one of abject terror. “Watch out,” he shouted at the top of his lungs.
I turned the wheel sharply to the right, just missing a little old lady driving a bright red sports car. She laid on her horn and stuck her third digit out the window.
Liam stared, his gorgeous mouth open. I think a senior citizen giving me the finger shocked him worse than my driving.


Check out Ghost For Sale here
Posted by diedre Knight at 3:00:00 AM