During the Tuberculosis epidemic of the late 1800’s an influx of patients from all across America flocked to the arid desert plains in hope of a cure, or at least some relief, from the dreaded ‘White Plague’. Thus, the very first hospital in Arizona was built in my hometown and filled eleven of twelve beds in only a matter of days.

To this day the care administered by the sisters has been an enduring source of tremendous pride even as the building itself seems to have grown as fast as the stories of not so departed spirits.

As far back as when there were still only two hospitals in town, St. Mary’s had a reputation for not only remarkable services; there were scores of ghosts as well. As kids, my friends and I all agreed if we ever got real sick and had to go there we’d probably die of fright before we ever got better.


For instance, Maria’s tio Gustavo swore he saw the bloodied spirit of an accident victim in the emergency room lobby late one night after a spiked punch bowl had shattered on his foot.  And Jimmy knew for a fact his already dead grandpa came back for his grandma on the second floor when she finally decided to go.

It wasn’t as though these were all sinister spirits. Indeed, the nun who haunts the fourth floor once used her eerie power to alert a living nurse of a patient about to commit suicide, and the unearthly saint reportedly continues to constantly follow the staff around at night, her reflection perfectly visible in the glass of the hallway windows.

Elevators seemed to be possessed as well; stopping between floors or constantly going to the fourth floor—no matter which button you push—and people getting on only to have the doors reopen with no one inside. 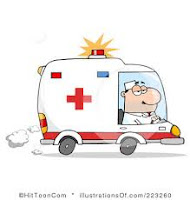 Given the many considerations involved in determining your destination, and the sliver of a chance that you might actually have a choice in the matter, where might an ambulance take you in the event of an emergency? Would you mind a haunted hospital? Or would you rather be taken anywhere else?