Prosperity and Perdition Beneath a Vulture's Gaze 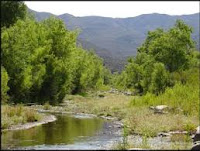 Henry Wickenburg may have paused to cool himself in the welcome shade of Cottonwoods along the sparkling Hassayumpa River. A seasoned gold rush miner, he would have readily noticed the large outcropping of quartz that would lead to the development of one of the most prosperous gold mines in Arizona history--with a nearby city named in his honor!

Before long Mr.Wickenburg sold eighty percent of his claim to a Mr. Benjamin Phelps and the Vulture Mining Company was formed.  Unfortunately, Mr. Wickenburg agreed to accept twenty thousand cash and a note for another sixty-five; for which he was never paid.

Possibly the best of the two (Remember Ruby, AZ?) best preserved Arizona mining camp/ghost towns, most of the structures at the Vulture Mine remain in remarkable condition, including the Assay office/Managers quarters; constructed of the same high-grade ore the mine was famous for and the Mess hall (sans the roof) where visitors have reported the aroma of freshly baked pies!

*Here is an excellent article regarding the conservation of this area being highly attributed to two devoted long-time residents, John and Marge Osborne

Regarded as the most productive gold mine in Arizona history (200 million), Freighters and a few seedy miners are believed to have pocketed nearly half of the proceeds during its twenty-one year operation.  One such miner, Jacob Walz later went on to make a famous (or infamous?) discovery of his own Lost Dutchman, though it is widely believed his gains were actually squirreled away from the Vulture Mine.

When heavy winter run off from the Bradshaw Mountains (Feb 1990) threatened to breach one of two dams at the Hassayumpa River, a representative was dispatched by the water company to alert the settlements downriver. However, the representative proceeded to over-indulge at a saloon along the way and no one was warned about the devastating wall of water that washed away eighty lives and an enormous amount of property.

The Walnut Grove disaster demolished all but his farmhouse and it proved to be too much for Henry Wickenburg; who began to sell off his land bit by bit to surrounding neighbors and the town of Wickenburg.  Less than five years later; penniless and claiming he’d had enough, the elderly founder  of the Vulture Mine took his own life in the woods behind his farmhouse. (This poor guy could not catch a break!)

When President Franklin Roosevelt ordered the Vulture Mine closed in 1942 due to more important war efforts the closure was thought to be only temporary, which is evident in how everything appears as if they all just went on break (cobwebs notwithstanding).  However the flourishing community of nearly five thousand soon dwindled and Vulture City dried up faster than a summer puddle.

Meanwhile the burgeoning nearby town of Wickenburg continued to prosper and one of the financiers of the Vulture Mine Stamp-Mill, Michael Goldwater detected and answered a need for the transportation and provision of goods and supplies across the California desert. His innovative venture led to department store chains across Arizona. His grandson, Barry became a prominent Arizona senator who (unsuccessfully) ran for the office of the United States President in 1964.

There's just something hushing about being in a room to which the occupants really did intend to return...don't you think?

In keeping with tradition and aside from the fact that it is National Camping Month (yay!) we are off to do just that! No worries if I'm a tad slower in replying to your most welcome comments while gathering new adventures to tell you about - I do check in every time we're near civilization:-)