After a long, dusty ride through the sizzling desert, John Dillinger would have found the decidedly western trappings of the elegant TapRoom supremely inviting. “Puttin’ on the Ritz’ might have been playing on the jukebox next to the pleasant WWII Vet who sat there every night until giving in to the pleadings of his tortured soul in room 214. He was not the first and certainly not the last guest to decide to extend his stay at the Hotel Congress and is known to take exception when the staff tries to vacuum room 214 unless they play 30’s music while doing so.

JohnDillinger however, had no intention of staying anywhere for very long.  But as luck (or lack thereof) would have it a fire broke out in the basement of Hotel Congress and traveled through the elevator shaft to completely consume the entire third floor where Dillinger and his men were staying. Though he and his men escaped unharmed, one of their suitcases containing items of identification was pulled from the inferno by an intrepid firefighter and the gang was promptly and famously apprehended by Tucson’s (earliest) Finest. 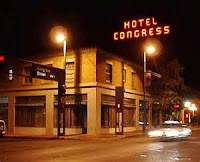 The third floor was never rebuilt and to counter the loss of revenue with only forty rooms remaining, the Hotel Congress was brilliantly transformed into a veritable hotspot for dining and entertainment; including gambling, back in the day. To this day the lively tradition endures with events going on most days and every night.

So you may never hear the laughter of the children who scamper across the upstairs hall and (presumably) belong to the cheery maid; her arms laden with fresh linens, as she slips into guest rooms without ever opening a door.  But you may possibly run across a vintage butter knife or two, absently left by Vince, who arrived one day and stayed for the next thirty-six years doing odd jobs with tools he pilfered from the kitchen. The staff will probably tell you that you won’t find a loose screw anywhere!

A highlight to some and a worry to others is that pesky bullet hole in the closet of room 242. It seems a pretty, young barmaid seeking refuge from some ugly trouble with the law chose to trade her earthly existence for that of the spirit world where she now gazes wistfully out of a second floor window.  To be fair, speculation still circulates as to the actual shooter since the hotel was teeming with cops at the time. 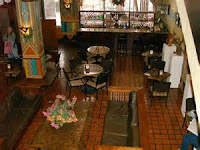 I hesitate to say “lastly,” because well, life seems to still go on (and on) here, but if you’re one of the fortunate few who get to see her, it is assumed the regal visage of the well-dressed woman who smells like roses and surveys the lobby from the top of the stairs is a former owner; checking on her staff.

I can personally attest to the delicious food and delightful entertainment but I’ve never actually stayed in any of the rooms. Would you? Would you consider a late night Flashlight Tour?