Few were unaffected by the spell of the Gold Rush days and California held its own allure for those who simply wished to go, as was the case for an entire family of nine who packed up all they owned and headed west. Along the treacherous Gila Trail across Arizona, the family encountered a band of Yavapai Indians whose initial cordial demeanor soon turned hostile and all but three family members were killed on the spot. While one son who was left for dead did actually survive, fourteen year-old OliveOatman and her young sister were abducted.

Despite the tragic demise of the family for whom the town was eventually named, the tent city soon exploded with prosperity as gold was discovered—lots of it. For a time the population totaled in the thousands and warranted several saloons, businesses and hotels; one of which being the famous Oatman Hotel wherein resides today’s reigning blogpost ghost. But I’ll tell you more about Oatie a little later.

Meanwhile, the Yavapai had traded Olive Oatman (for food and blankets) to the Mojave Indians who were much kinder to their captives, though Olive’s sister perished from the harsh elements. Five years passed before Olive was at last released, the Mojave having permanently marked her face; ensuring a life of public scrutiny to which she became quite adapt. 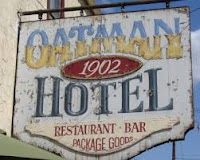 Conversely, the town of Oatman continued to prosper, drawing not only fortune-seekers but Hollywood A-listers who chose to grace the halls and rooms of the Oatman Hotel. Legend holds that newlyweds Clark Gable and Carol Lombard enjoyed their stay so much that they’ve returned in afterlife and can be heard whispering in the hall.

But alas, (kicking the gold dust) as with so many good times, these times changed. The rather well-preserved town of Oatman now boasts a total of maybe a hundred year-round residents including the spirit of Oatie, an amicable Irish miner who didn’t make it back to his long-reserved room one frigid winter night because he fell asleep in a besotted stupor outside the hotel and froze to death. (Oh, Oatie…)

Anyhow, Oatie’s presence seems anything but evil, though he is given to mischievous activities. His room has been left just as it was; complete with his work boots under the bed where the indentation of a body can sometimes be seen beneath the window that Oatie seems to prefer is left open – year-round. He can’t seem to keep from tracking footsteps across a newly cleaned Lobby floor as he wanders around playing his bagpipe.

Regrettably, the hotel no longer offers guest accommodations and is now a museum, gift shop and popular restaurant and bar.

Now, getting there could prove to be a little tricky. RV-ers beware! There is no parking for anything bigger than a loaded pack-mule or a small compact car and it gets busy during winter tourist season.
And you may really want to park and walk around awhile after a wildly winding drive on a road (well suited for bikers) with cliff-hanging switchbacks that seem as imposing to impatient travelers on their way to Laughlin, NV as it is impressive to consummate wanderers in route to the next adventure.

Left behind by the miners of yore, wild burros freely roam the dusty main road on the lookout for any and all handouts (tourists can purchase burro treats at just about any store on main street), and Street Theatre is free and enjoyable with old western gunfights staged daily at noon and 2:15pm.  *Note: They roll up the dusty carpets at sunset.

Personally, I’m more drawn to the history surrounding the Oatman massacre than a perhaps delightfully haunted museum, but I am fascinated with the idea of wild burros roaming the streets! How about you? Would you take a short detour on a pleasant day to visit Oatman?