Some Living, Some Not So Much...

Fashioned right into the hillsides, shacks and mansions alike seem to spring forth in the splendorous facets of multicolored wildflowers on an early summer morning.  It should be noted that visiting some of these homes (long as you’ve been invited) could be quite the endeavor as the only access is, often as not, limited to a series of steep stairways originally laid over mule paths worn into the terrain, back in the copper mining days.

Can you imagine a four-story school house with ground-floor entrances on every floor?

By the end of a long day of eventful wandering, a nice, quiet place to relax sounds fabulous, especially when considering the charming turn-of-the-century allure of just about any establishment in the small town of Bisbee, Arizona.

Founded in 1880 by Phelps Dodge Mining Company, the town soon boasted upwards of 24 thousand inhabitants; mostly of the rather flamboyant persuasion. While once considered the largest city outside San Francisco, a 2010 census estimated a population of only 6 thousand including many descendants of the original residents; some living, some not so much.

For instance an overnight stay at the Bisbee Inn might involve a glimpse of a tall handsome cowboy/miner; presumably looking for the husband who killed him (room 11). If you feel like you’re not alone in room 15, it’s just a tired miner wanting some rest after a hard day’s work and residing in room 23 is a purring cat who was never allowed into the hotel until after his death.

Caution is advised after attending the Haunted Pub Crawl if you’re stumbling back to your room at the Copper Queen where the ghost of Billy, a mischievous child, likes to move the furniture around.  However, the wafting scent of lavender is only Julia, Bisbee’s famous “Lady of the Evening” who took her own life, possibly for the love of the elderly, debonair gentleman who wears a top hat and occasionally paces the elegant hallways. 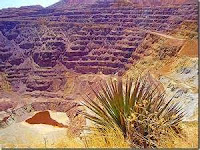 Now that you’ve had a restful night’s sleep, at least another day is required in order to experience all there is to see and feel. You can’t miss the gorgeous Lavender Pit (I’m not kidding, it’s an open pit mine) or the Queen Mine Tour. From the hushed museums, the first-rate restaurants, walking tours (including the annual 1000 Great Stair Climb!), to the distinctly spiritual ambiance of the town itself, it’s an all-around inspiring adventure!

The wonderfully well-preserved historic treasures notwithstanding, and keeping in mind that nearly every establishment in Bisbee is reportedly haunted, I loved it! Would you dare?