U is for Uinta Chipmunk!  Or ‘Hidden Forest” chipmunks, are outgoing cousins of the ground squirrel; preferring the pine and fir forests in the higher elevations of Arizona as opposed to the desert floor, where I live. Fortunately, I have the opportunity to observe them every summer during fishing and camping season!

Contrary to wary interaction with people (stealing or begging for handouts), they are actually solitary fellows and quite aggressive to other members of their species. They spend the winter in burrows under rocks or shrubs and the summer stocking their burrows with food for the winter. They are known to have a number of vocalizations, the most distinct of which is a sharp “chirp” that can go on for fifteen minutes! (Issuing the morning news, maybe?)  They issue a low ‘chuck’ when fleeing a predator or the scene of a crime such as thievery!  (They find corn chips irresistible).
At times when our campsite is quiet and everyone else is off fishing or exploring, I love to read a book under a tree. But one such afternoon the serenity was shattered when I received a direct hit by a pine cone from the branches above.  I stumbled to my feet in shock, had the tree rebelled against my presence?  A small lump quickly formed on the top of my head as I warily scanned the towering pine in search of the offender. And then I spied it on a branch about four feet above my height, a chipmunk sat gleefully chirping – and snickering, I swear! 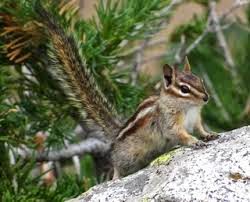 How's everyone doing? Still hangin' in? We're heading down the backstretch now - five to go!  Happy Friday, everyone :-)