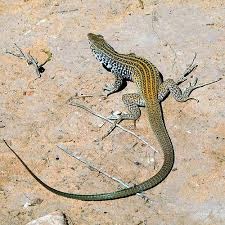 T is for Tiger Whiptail!  Of all the lizards I watch every day, these busy little guys are by far my favorite! From sun up to sundown they can be seen zipping between shade and sun, constantly foraging for insects, and all the while the tail whips about as if to punctuate their frenetic energy.

Keenly aware of its surroundings, the whiptail has eluded capture by many an intrepid cat and curious human. They are however, known to ‘drop’ their whip-like tails, which will flop around (as a distraction) while they make a get-away when all else fails. Used only as last resort, this tactic is extremely draining on the whiptails as they lose both energy and nutrients during the ‘drop’ and re-growth process. 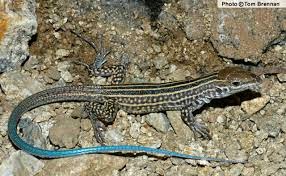 The little ones have bright blue tails until maturity, when their coloring becomes more uniform; tan, brown or olive, with the rest of their body.  Apparently without restrictions, adolescent whiptails emerge from hibernation a whole month before the adults do and stay out a month after the adults have bedded down for winter.

Similar to all lizards, the whiptails communicate emotions such as aggression or courtship with head-bobs and agonistic push-ups. Interestingly, Tiger Whiptails are one of six types which are an entirely female species, and it’s anyone’s guess which females might be ‘playing’ the role of male during any given mating season.

Does anyone else have Whiptails zipping around the yard?