P is for Prairie Dogs!  I know I nearly gave it away yesterday; talking about Prairie Dog Town USA, but I just love these little critters!  And they seem to love us too, since they’re not afraid to walk right up to see what you have to snack on. :-)
They are delightful to watch at play and are quite affectionate with each other; sharing frequent hugs and nose-nuzzles. To warn of danger they have a pitched warning bark that signals different types of predators. Studies suggest that prairie dogs may have one of the most sophisticated of all natural animal languages.

Typically before the young come out to play in the morning a sentry will pop up out of a burrow to have a look around. While prairie dog tunnels actually assist in erosion prevention by funneling rainwater into the water table, studies provide conflicting conclusions as to the benefits and detriments of prairie dog towns on farms and cattle ranges and at one point drastic measures were employed to prevent what some perceived as further damage.

Though the Prairie dog population was nearly wiped out (entirely eradicated in Arizona) in the twentieth century, these prairie dwellers are resilient and replenished their numbers almost as fast as they rebuilt massive spreads of complex underground tunnels (the largest documented Prairie dog town covered 25000 square miles!) in wide-open areas of western cities where they are no longer a threat to ranchers and livestock; which couldn’t have been easy considering a typical male has to defend his territory against other males at least twenty times a day. 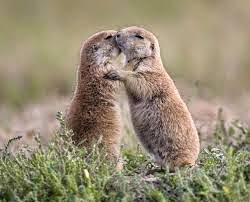 Fortunately for the prairie dogs, toxicants are now largely restricted and the native prairie dwellers of Arizona have been reintroduced!