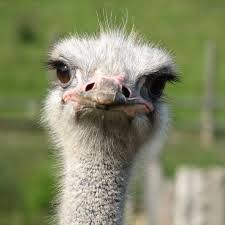 O is for Ostrich!  Flightless and toothless, these African natives are the largest living birds in the world! Built for running, they can reach speeds of up to 43 mph and maintain a speed of 31 mph.

When threatened they’d just as soon run, but their powerful legs have a kick that can actually kill a human or a predator. Without benefit of teeth for chewing they swallow pebbles to grind up the food they eat.  The Ostrich have the largest eyes of any land animal and three sets of eyelids, shaded by heavy long lashes. They can go without water for several days and enjoy an occasional bath.

Parent Ostrich are extremely protective and will sometimes engage other parents in a winner takes all (the young) duel!

The Ostrich was nearly extinct in the late eighteenth century but is now classified as a ‘species of least concern’. However, their numbers are declining due to the popularity of their feathers, hide, meat and eggs.

In case you’re wondering why in the world I would talk about a bird that is not an Arizona native, well it’s because we proudly boast one of the most popular roadside attractions in America! Rooster Cogburn’s Ostrich Ranch is located just off I-10 near the community of Picacho, Arizona.  The third generation owners have expanded the modest ranch into a “tour around the world in one place” with engaging, hands-on exhibits such as the Rainbow Lorikeet Forest and (my personal favorite!) Prairie Dog Town, USA.

Any notable roadside attractions in your area?