M is for Mule Deer!  Named for their large ‘burro’ or mule shaped ears, Mule deer can be found pretty much throughout the entire western United States and even into Canada. Having eyes located on the sides of the head allows for 310 degree vision, though they can’t discern stationary objects at a distance. Their keen sense of smell and can detect a human odor at half a mile away and water two feet below ground.

It’s a good thing they are herbivores because they do not have upper teeth! They do have a sturdy plate in the roof of their mouths, likely to facilitate consumption of a very selective diet of leaves and berries as they leisurely graze whatever region they inhabit. Preferring early mornings, evenings and moonlit nights, sporadic meals are eaten with a great deal of care.

If threatened or startled Mule deer don’t run as do other deer, instead they have a bounding leap during which they can turn or completely reverse direction in a single bound with all four feet landing together! 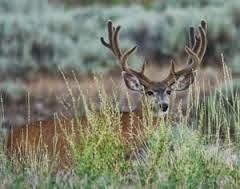 Males grow antlers specifically for mating season in the spring, only to shed them in December, after all the courting is over. This process continues throughout the seasons, though younger bucks may lose their antlers earlier due to courting combat.

Mule Deer are not currently endangered, though conservation efforts are in progress.

What type of deer roam your area?