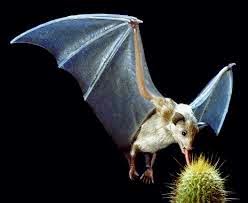 L is for Lesser Long-nosed Bat!  While the outlook for earthly existence isn’t looking good for bats in general (nearly half of all species are on a ‘threatened’ or ‘endangered’ list), they do still have a couple things to write home about.  For instance, bats are the only mammals that can fly and some can reach speeds of 14 miles an hour!

They are nocturnal and do all of their eating and traveling at night. And speaking of traveling, these are truly long-distance migrators! Between central Mexico to Arizona and New Mexico, their migration is timed with the flowering cycle of their favorite food sources such as Organ Pipe Cactus, Saguaros, and Agave. Their slender tongues measure roughly the same length as their entire body and allow them to draw the nectar from night blooming plants and cacti—and hummingbird feeders, too if you don’t take them down at night. Believe me, I know! They are terribly messy eaters and will consume (or spill) the contents of every feeder in one night.

Their shelters of choice are typically caves and mines, especially as the females need a place to have their pups (they only have one) when they first arrive from Mexico in April or May, however they can be quite resourceful as they’ve been noted roosting under bridges (it’s not like we have any water under there!), in patio rafters and scrub brush.  We actually get so many making their home under certain bridges here that concerned folks post “Bat Maternity” signs!