Well, I’m crushed. Dorothy’s ruby slippers (The Wizard of Oz) sold at an auction for $660,000. Not that I’d have anywhere to wear them… but this is the kind of thing a convalescing trivia buff runs across.

A Superman appears in every episode of Seinfeld, and an orange is seen right before a death - or close call, in all of The Godfather movies. Now they tell me. Did anyone catch the little red car in the background during the epic chariot scene in the movie Ben Hur?

You might imagine my relief when hubs announced he’d “found something” on Netflix! We watched a film called “Knowing,” starring Nicolas Cage. I thought the acting was a bit edgy, but the storyline is really quite good as he tries to discover the meaning of a page of endless numbers which seem to connect locations to unexplained events involving massive casualties. The gripping ending provides much to consider, no matter your spiritual or practical acumen. 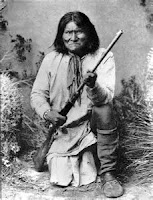 For example, those who give the slightest credence to the time-defying travels (Phoenix to New Mexico in only a matter of days!) of an irascible Apache called Geronimo, via vast and far-reaching underground passages beneath the Salt River Valley, might easily accept the notion that these extensive tunnels were excavated by the very same legendary “little people” also credited with directing the unexplained light shows above the Superstition Mountains. Likewise, they may have an entirely different conception of what exactly happened to Cahokia, the largest prehistoric Native American (cosmopolitan) commune ever recorded (roughly where St. Louis is now) than the Army Corp. of Engineers who tirelessly worked to modify the Mississippi River from meandering so much, and thereby generated prime real estate for wildlife preservation, the production of agriculture, and the development of several other industries (jobs!) as well.

Admittedly, all those industries prompted the “Clean Water Act” (not a bad thing), but do you think those elaborate tunnels were burrowed only for Geronimo’s convenience? And, as reticent as our government seems to be about even acknowledging the possibility of extraterrestrial beings, what do you make of the need for a Federal Regulation prohibiting any contact between humans and alien beings - or vehicles?

Not that watching the movie “Knowing” will send you on a philosophical tangent, but I do recommend it (the movie, I mean). Besides, ruminating is good for me just now as I recover from a visit from an old antagonist called Epilepsy, which has pretty much demanded (much-appreciated) time to think and read and write while my mind reboots and my body recoups from the battering.

Thank you in advance for your patience (What the heck is she thinking?) and your ever-thoughtful comments!
Posted by diedre Knight at 2:30:00 AM