The Lasting Spirit(s) of Theatre

On the last day of an often vexing year, we decided to end it on a high note by all piling into one car (not so bad on a cold and rainy day) and taking in a late afternoon show at The Gaslight Theatre. The musical comedy was loosely based on a Christmas favorite and fittingly titled “Elf’d.” I think we all laughed more than we had all year and won’t soon forget all the pizza, popcorn and Rootbeer floats!

It’s impossible to overstate the rustic ambiance of the wooden walls, floors, and stage.  Lining the knotty walls are images in black and white and glossy color of past and present Gaslight stars that lend a sense of graciousness surpassed only by the warm handshake you receive from each actor on your way out the door.

Naturally (or not), on the ride home I thought about all the shows; the actors, and the patrons who keep the live stage theater alive and kickin’. And of course, I thought about those who’ve passed on.

Thinking about theater ghosts took me way out of my desert digs to a place on the south coast of the Isle of Wight; in the English Channel, where more than a few ghosts tenaciously linger at the Ventnor Operating Theatre. 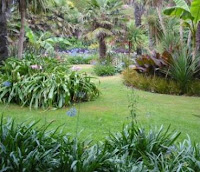 “The prettiest place I ever saw in my life” ~ Charles Dickens

The Royal National Hospital for Diseases of the Chest at Ventnor saw upwards of 100,000 patients in under a century. Most suffered from consumption – or Tuberculosis; a disease for which a cure had not yet been found, leading to much speculation and an alarming amount of experimental surgeries being performed in the Ventnor Operating Theatre.

By the time the last patient left in the summer of ’64, plans were already forming for repurposing the grounds in anticipation of brighter days, without the pall of death and sickness.

The first phase went as planned and the Ventnor Botanic Gardens soon flourished across the half-mile stretch of land where terminal patients were once housed.  Problems began with the demolition of the hospital itself.  To all who witnessed, it seemed the hospital was not willing to go.

There were equipment malfunctions, and utter failures - tractors, excavators, and a Ball Crane were all wrecked in the process - unexplained accidents, and grizzly sightings of moaning ghostly figures that led even the toughest worker to flee from an honest day’s pay. 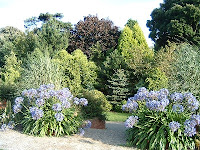 "Ventnor is a sun-box - north winds would have to confess that they have not even a visiting acquaintance with her." - Ward Lock Guide (1931)

When at last only the Operating Theatre remained, and all other efforts had been vehemently resisted, it was decided that the remaining demolition would be done by hand, there were few takers. Those who dared attempt to complete the work, left with their sledgehammers long before dark each day, having endured being scrutinized by disapproving spirits since sunrise. At least a couple of the workmen who saw the demolition to the end recall the strong smell of ether as they stood in the icy rubble of a stoic Theatre on a balmy summer day.

Once it was clear that not so much as a weed would grow where the hospital once stood, it was paved for a parking lot; a place where lights often flicker at night and dogs won’t approach by day.

Have you been to the Isle of Wight? Would you visit Ventnor Botanic Gardens?