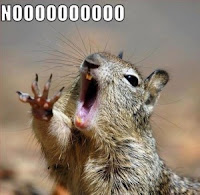 Roger, my northern squirrel-friend was quite perturbed by the backhoe and refused to come down from the neighbor’s tree for a visit the entire time our fence was being built.  He did, however, throw a few pinecones ;-)  I guess you can tell we’ve been to the cabin, and while the mighty oaks are thriving nicely, the aspens once again shimmer in the wind, and in the sway of the lofty pines is the distinctive sound of ocean waves, enjoyment was marred only by the brutal head cold which we shared, one by one, the entire six days we were there. Incidentally, I don’t recommend watching people work, not when it takes two hours to go and get whatever they forgot or need to replace – three times a day! It was frustratingly slow-going, and my girls practically tore up the flooring, wanting to get outside.  I’m considering the feasibility of apprising Guinness book of the vast amount of tissues we went through! Especially since the bird that sings his little heart out at three in the morning is a new discovery for me alone, and is, in fact, well known throughout the mountain community (shucks).  It’s a Northern mockingbird, adept at mimicking daytime songbirds and apparently prone to all night serenades. He is pitch black in color, which explains why I couldn’t see him – even beneath a glorious Blue moon. Did anyone else see that?  Other than that, we made it home; safe and sound, to a flooded kitchen - due to a water leak in the icemaker.  Sometimes we travel with gremlins ;-)

Before I left, I read a terrific post by Stephanie Faris with guest author Elizabeth Seckman about a place with a most unusual name and a fascinating origin. Then, for whatever reason, the theme itself began to simmer.

Knockemstiff, Ohio for example, is the scant remains of a once rough-and-tumble village located in northeastern Ross county; haphazardly strewn around the remnants of a rural intersection.  One of only two main roads now ends in dirt and location signs are not replaced because “the residents already know where they are, and not many strangers pass through.” ~ Donald Ray Pollock 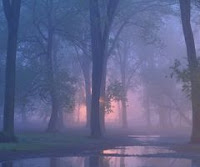 But if you go, you’re liable to hear the screams of a long-ago suicide echoing from below the cliffs at Devil’s Leap as a cigarette-smoking specter lingers in the mists of a dip in the road called Foggymoore.  If you care to wander the hollows at night, you might encounter the mournful wails of the beautiful Lindy Sue, whose life was taken too soon on the bridge over Paint creek. And it’s not so much Donald’s pond, but the ancient souls of the long forgotten cemetery behind it that just might quicken your pulse.

Though the word itself is widely known as slang for moonshine, a popular belief is that the town acquired the name when two women fought over a man in front of the church, and the preacher suggested that instead of fighting each other, they should go after the man and “Knock em’ stiff”!

Have you ever had a ‘gremlin’ vacation? Does your town have an unusual name?
Posted by diedre Knight at 2:30:00 AM