Friends of the Famous - Z 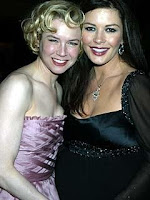 ReneeZellweger was still in college and intending to bring home a cat from the local shelter when a collie-golden retriever mix bounded from within a jumble of kittens and puppies to rest his little head on her foot. The dog basically named himself, she says of Dylan, by preferring to take his puppy-naps on the face of Bob Dylan, featured on a Rolling Stone magazine cover.  Later, with no formal dance or voice training, Zellweger learned what she needed to know for the stage production of Chicago during ten months of rigorous training and by watching her co-star Catherine Zeta-Jones, who by the way, has her own furry sidekick (a Coton de Tulear) named Figaro, who likes things his way. For instance, a ramp is brought in because ‘Figgy’ refuses to climb stairs and an impetuous spirit once prompted him to bark during one of Zeta-Jones’ performances of “Bring in The Clowns”! 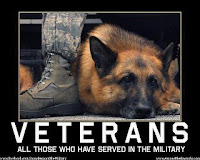 After a little more than two years training together, Marine Cpl. Jose Armenta and a German shepherd service dog named Zenit served in Afghanistan. As a team they worked ahead of their troops, identifying IED’s – except for the one Jose stepped on.  Waking up back in the states, Jose was dismayed to find that Zenit had been given another handler and re-deployed. While many wounded soldiers seek separation and closure, Jose felt incomplete.  Between many surgeries and throughout a lengthy recovery, Jose filed paperwork and petitions necessary for the retrieval of his canine friend.  When at last Jose picked Zenit up at the base, a three hour drive from home, the dog had no problem recognizing Jose in his wheelchair and drenched him with wet kisses.

In case you’ve ever wondered how a Zoo doctor’s day might go, Denise Rodgers has a few thoughts:

The mockingbird has an unclear ache.
The lion's so hoarse he can't roar.
The hog cannot eat, as his tummy's upset
and the parrot can't talk anymore.

The doe has a pain in the deer ache.
Just what should the beast doctor do?
The duck is so sick she can't possibly float.
It's a really bad day at the zoo.
by Denise Rodgers

Has a pet ever embarrassed you? Would you have kept Zenit too? When is the last time you visited a Zoo?