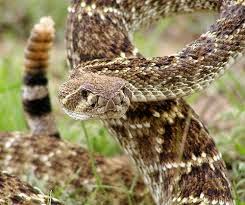 W is for Western Diamondback Rattlesnake!
The largest of the rattler species, the Western diamondback is also considered the most dangerous as it does not back down when threatened and can deliver a deadly strike in mere seconds at a distance half its body length.  It’s of no consolation (to me, anyway) that these bad boys can grow to over seven feet long!

A handful of friends and I narrowly escaped expiration a few years back when we ran across one stretched across the pathway of a bird sanctuary out in the sticks. With all the ground scrub we couldn’t tell which direction the snake was headed but no one really cared as much as getting the heck out of the sanctuary! Poor little birds… We did notify authorities.

Yeah, a Diamondback’s diet consists of lizards, rats, squirrels, rabbits and any bird within reach. Gads!

Diamondbacks are identified by the spade-shaped head with black bands from eyes to jaws; similar to the Lone-Ranger or Zorro mask, and the signature dark diamond-shaped spots extending to black and white stripes on the tail near its rattle; the dreaded sound of which is unmistakable. Are you on the edge of your seat yet? But wait, there’s more!  Babies are born as many as twenty at a time; complete with fangs—and venom!

On a lighter note (Ha!), Diamondbacks do have a few predators, including eagles, hawks, roadrunners, kingsnakes, coyotes and bobcats.

But on the God-forbid chance that you are ever bitten Seek Immediate Medical Attention! There’s no such thing as a ‘mild’ bite and you will need antivenin ASAP! In addition to intense pain, symptoms can include rapid heartbeat, swelling, dizziness, confusion, nausea, temporary blindness and seizures.

I once had a cat who thought it great fun to challenge a rattler in the tall grass by bapping it down each time it struck at her.  Our dog was not so lucky and was bitten between the eyes. By the time we got her to the Vet (thirty mile away) her head had swelled to the size of basketball! She was okay, thankfully!

I’m more than glad to have a kingsnake in the yard to help keep the peace! I’m also anxious for tomorrow’s letter X; it’s sure to be more pleasant :-) Happy blogging folks!
Posted by diedre Knight at 1:30:00 AM