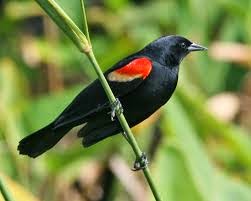 R is for Red-winged Blackbird!  The most widely abundant species in North America; you’ll find these handsome songbirds anywhere there is water nearby—even if it’s only an irrigated field or a golf course!  The males are gregarious characters who like to make their presence known by sounding off all day from perches that provide the observer an optimum view, while the female quietly toils away the days on the ground; gathering food and weaving remarkable nests. [In winter they host impressively large gatherings of kin (other blackbirds) for elaborate feasts].

The nests the female creates (entirely by herself) are intricately woven, sturdy baskets of twigs, grass and mud and typically completed over the course of several hours.

Ironically, the males are rather suspicious of the color red and have been known to dive-bomb a red hat or shirt even if you’re not near his nesting territory.